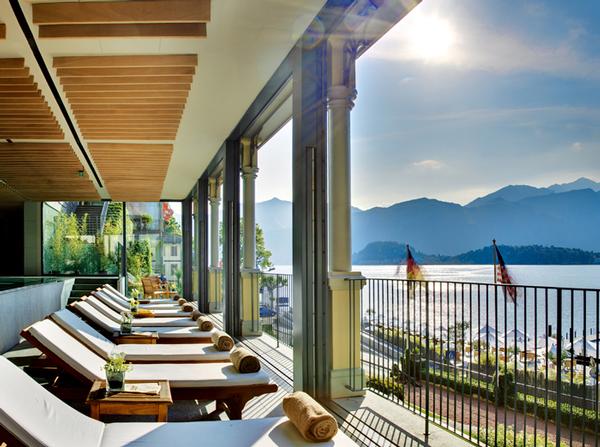 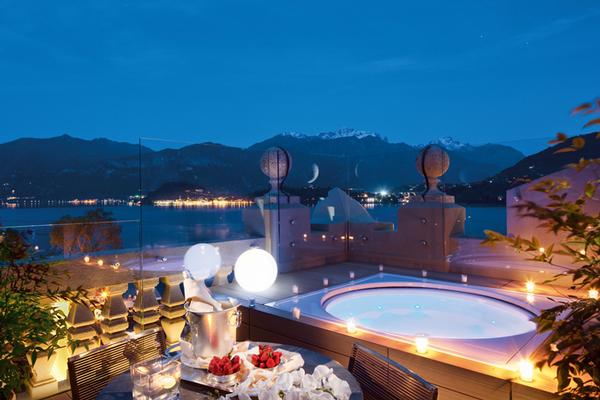 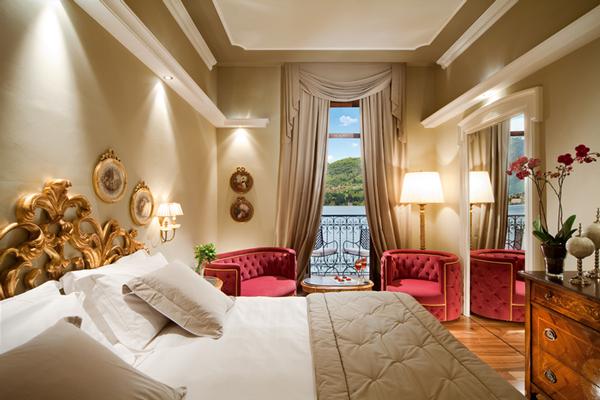 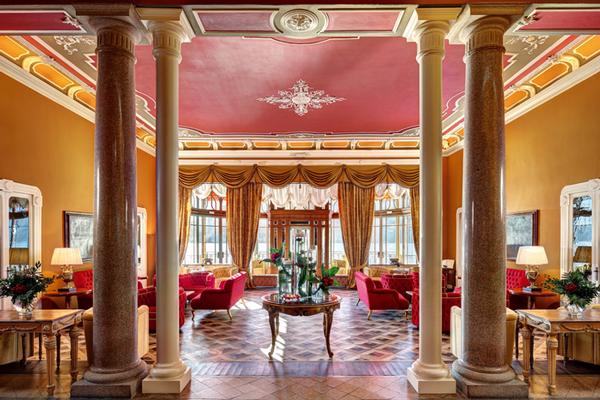 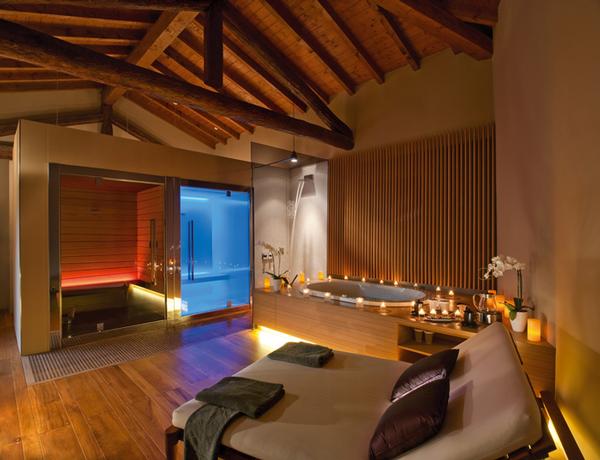 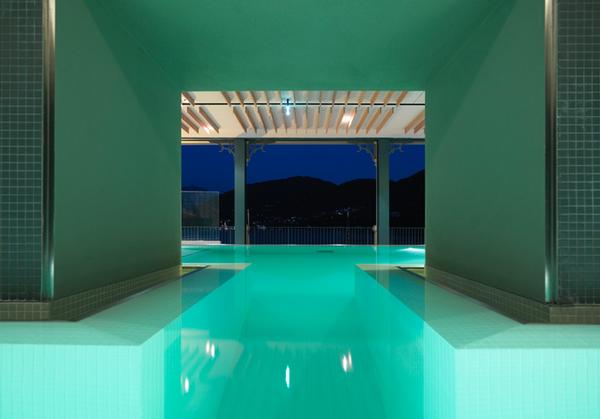 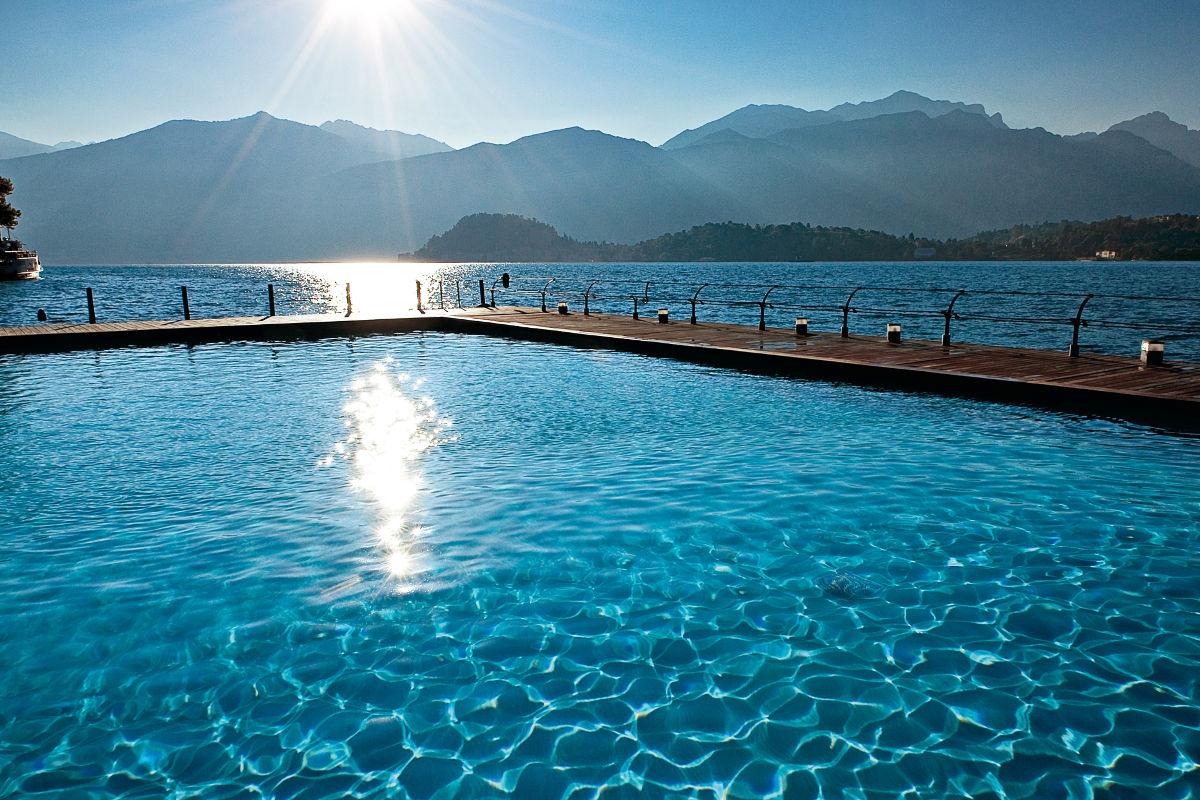 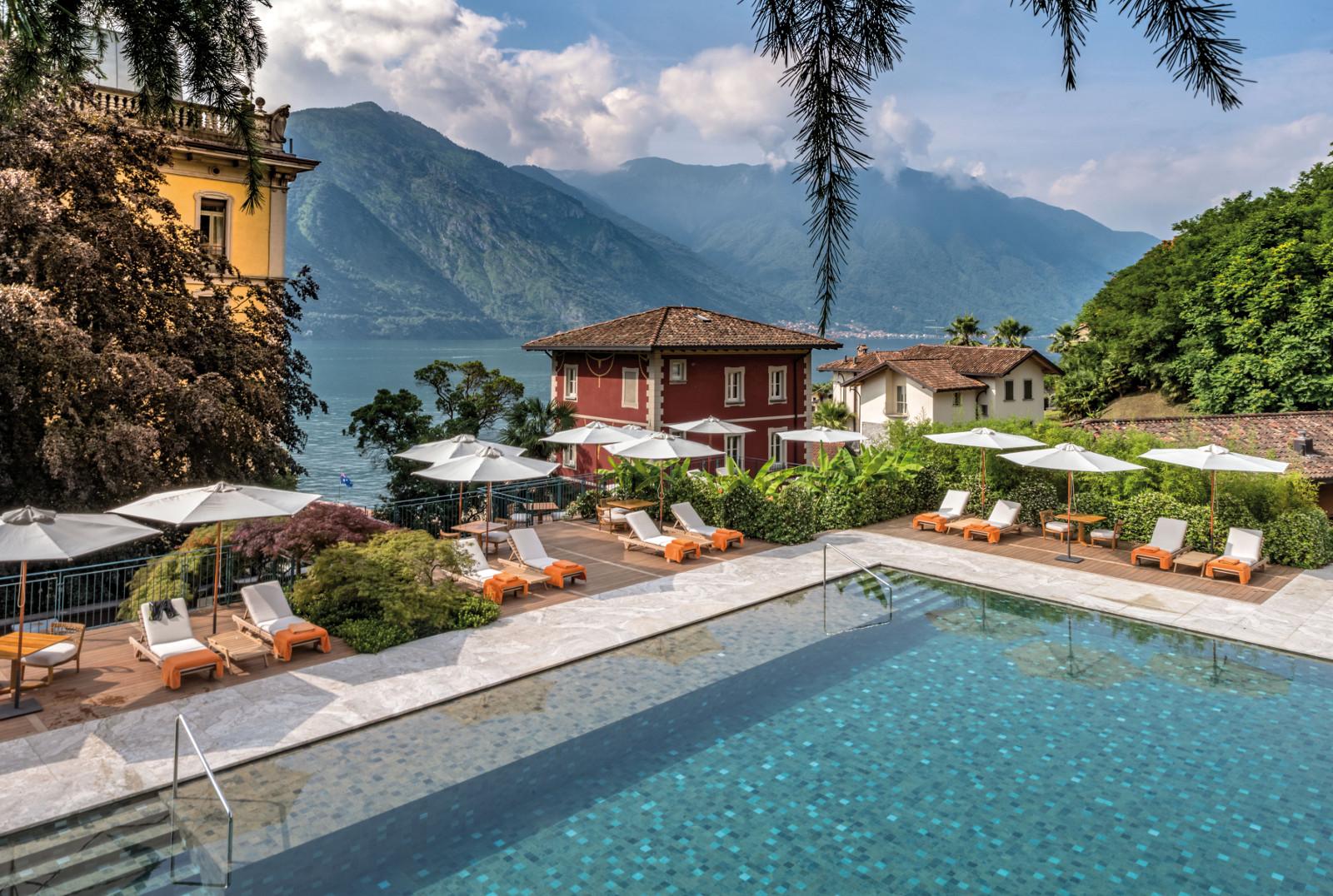 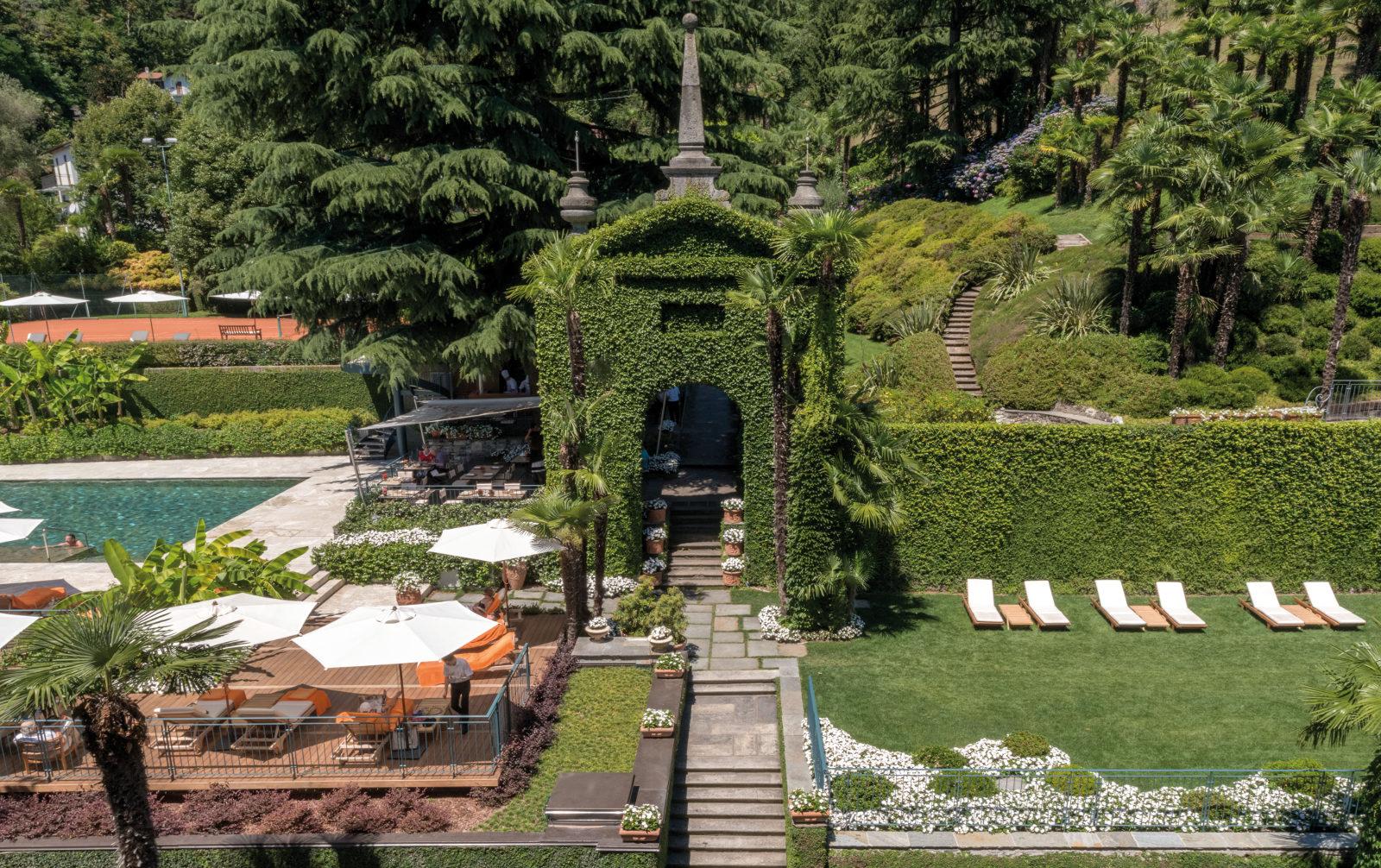 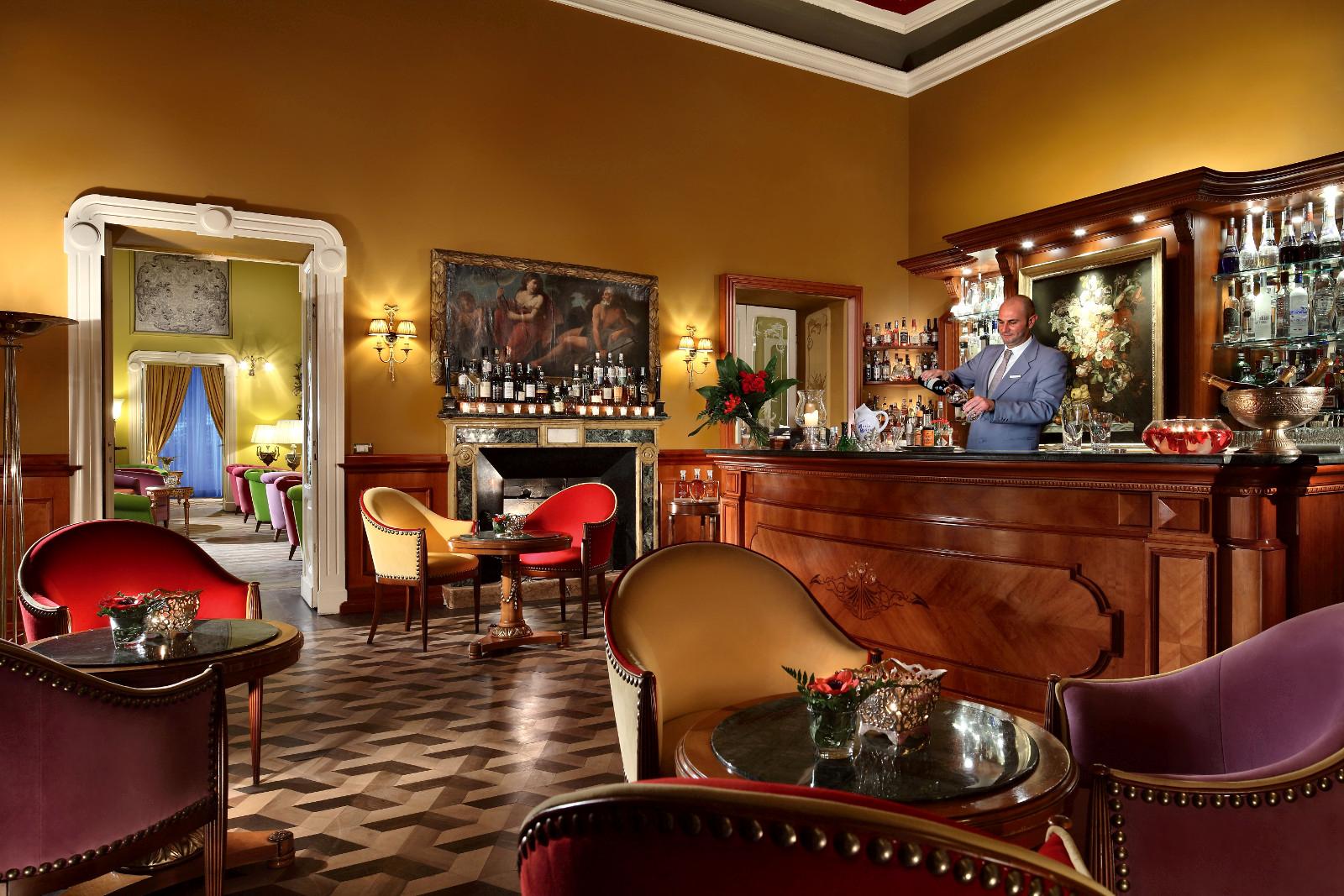 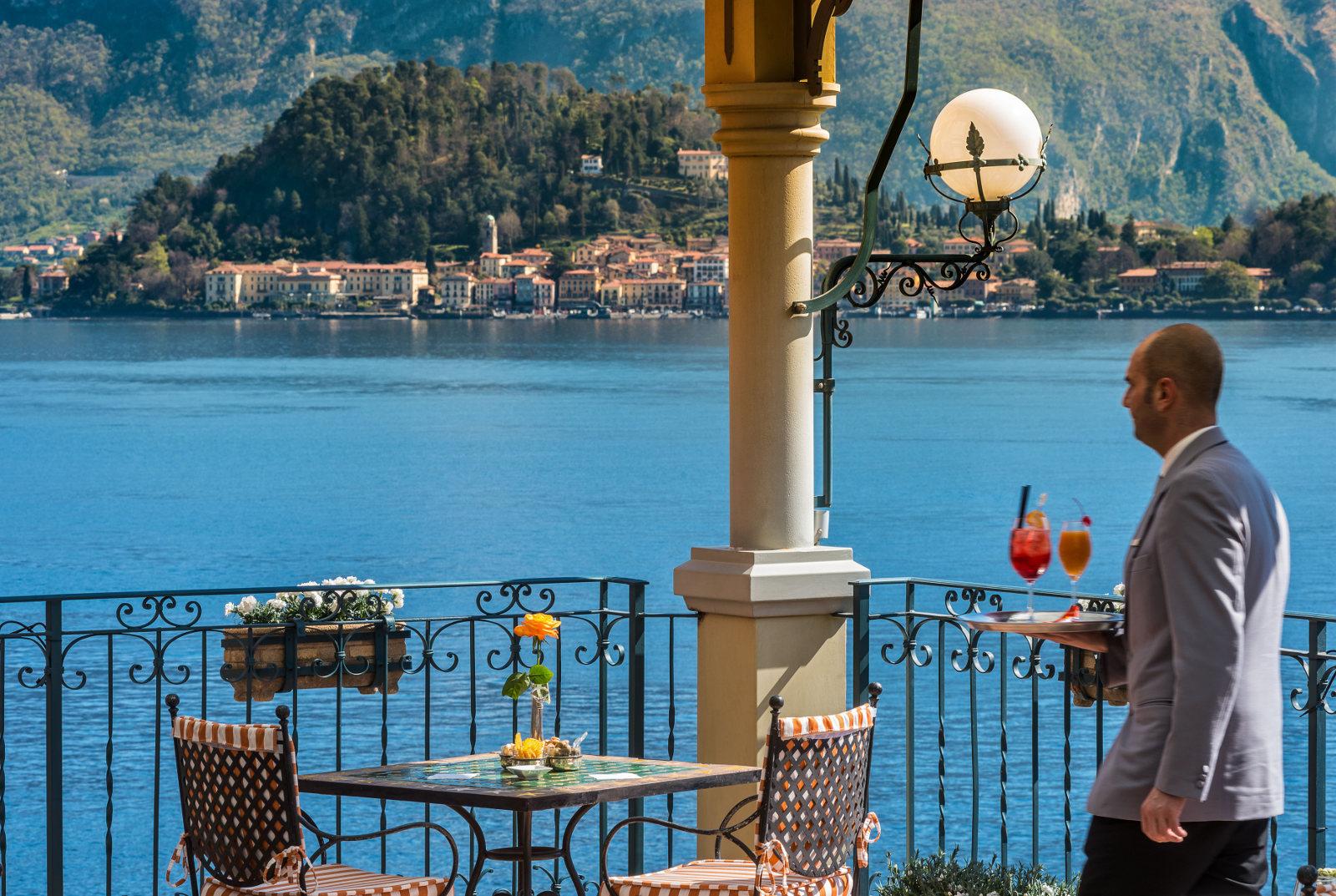 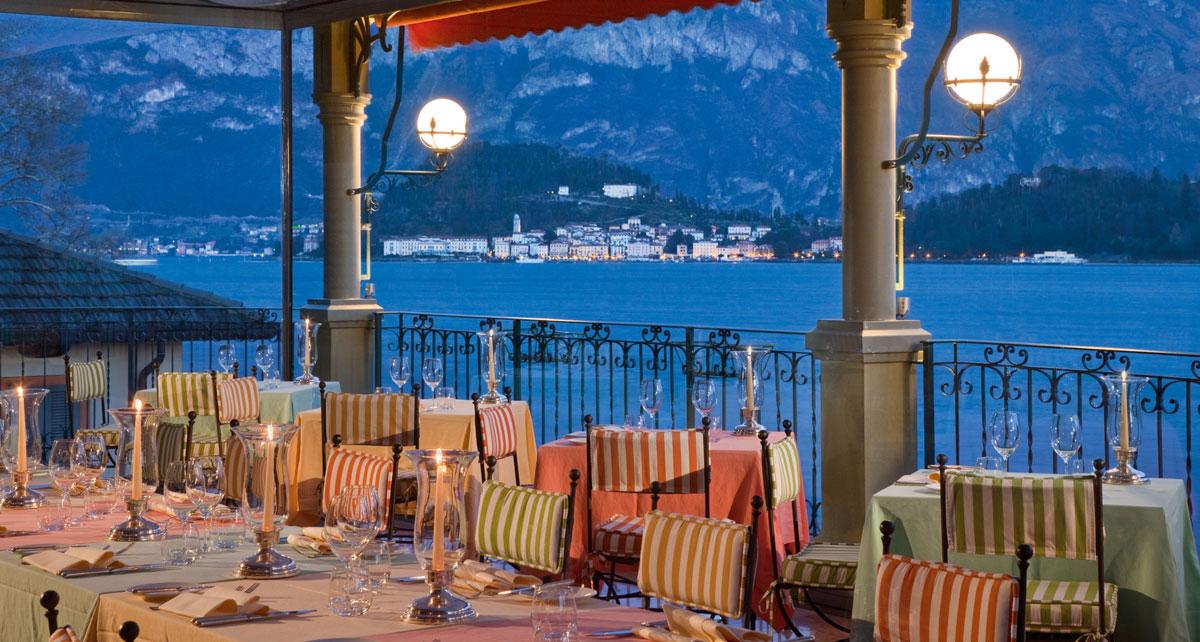 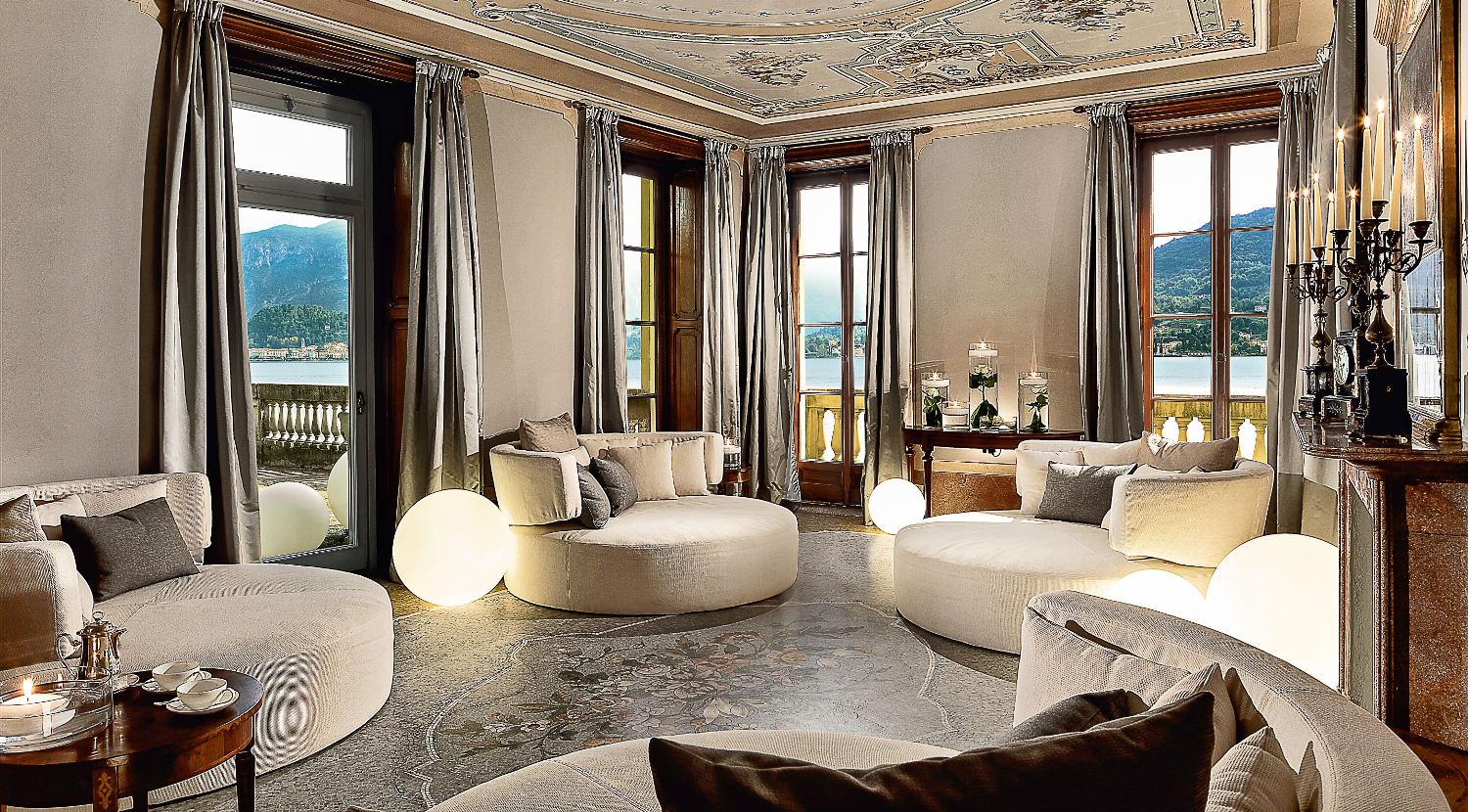 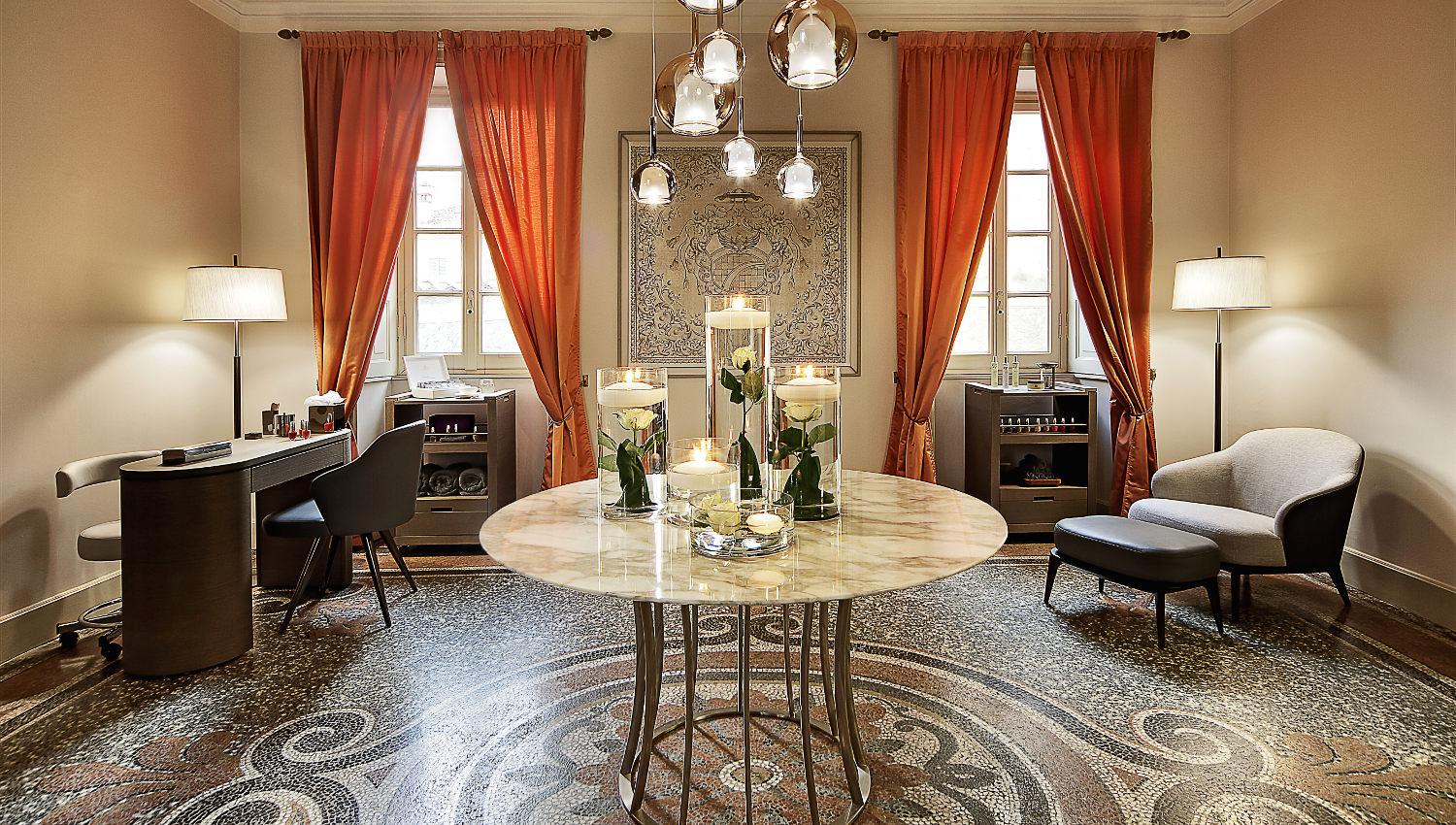 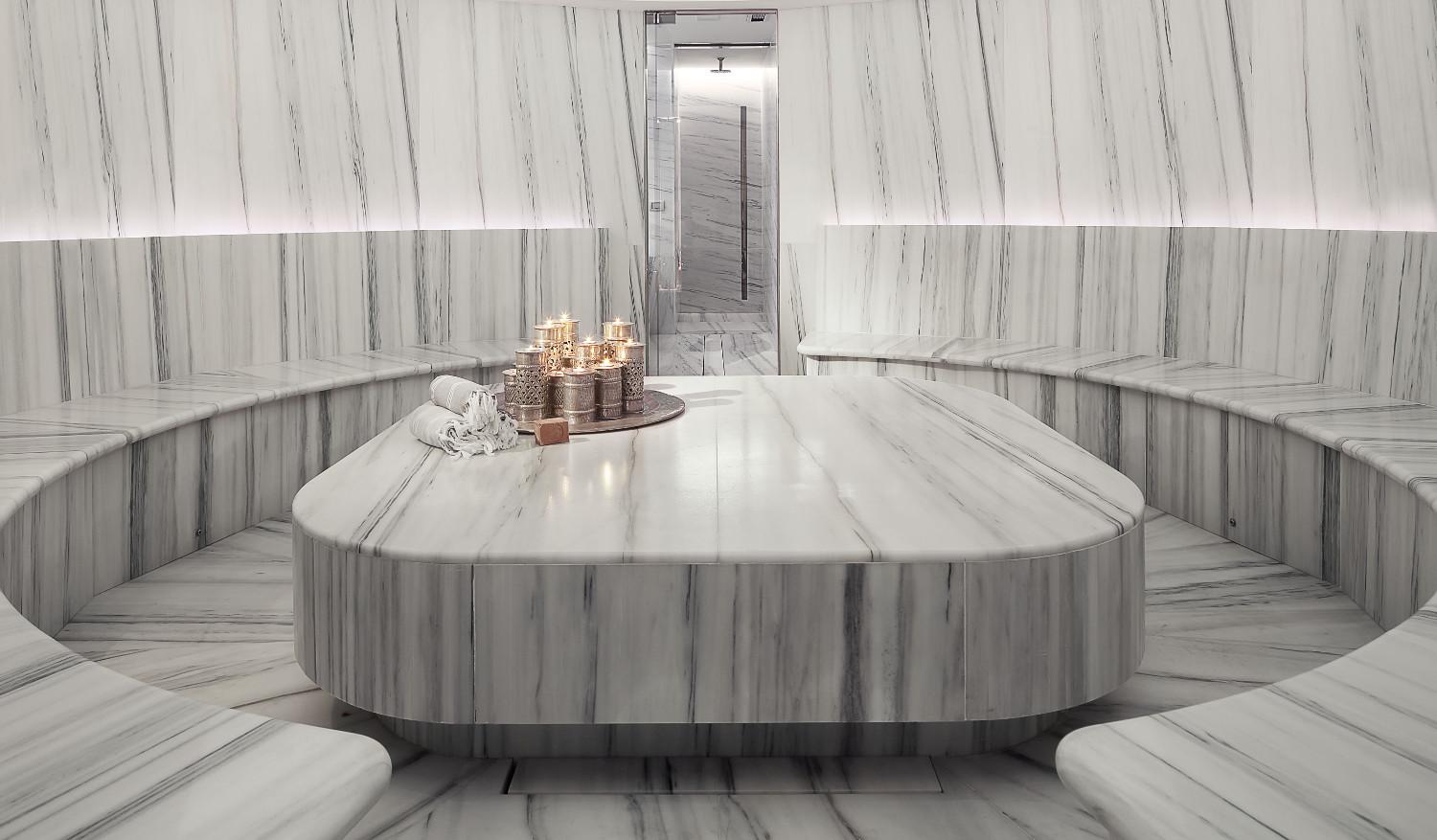 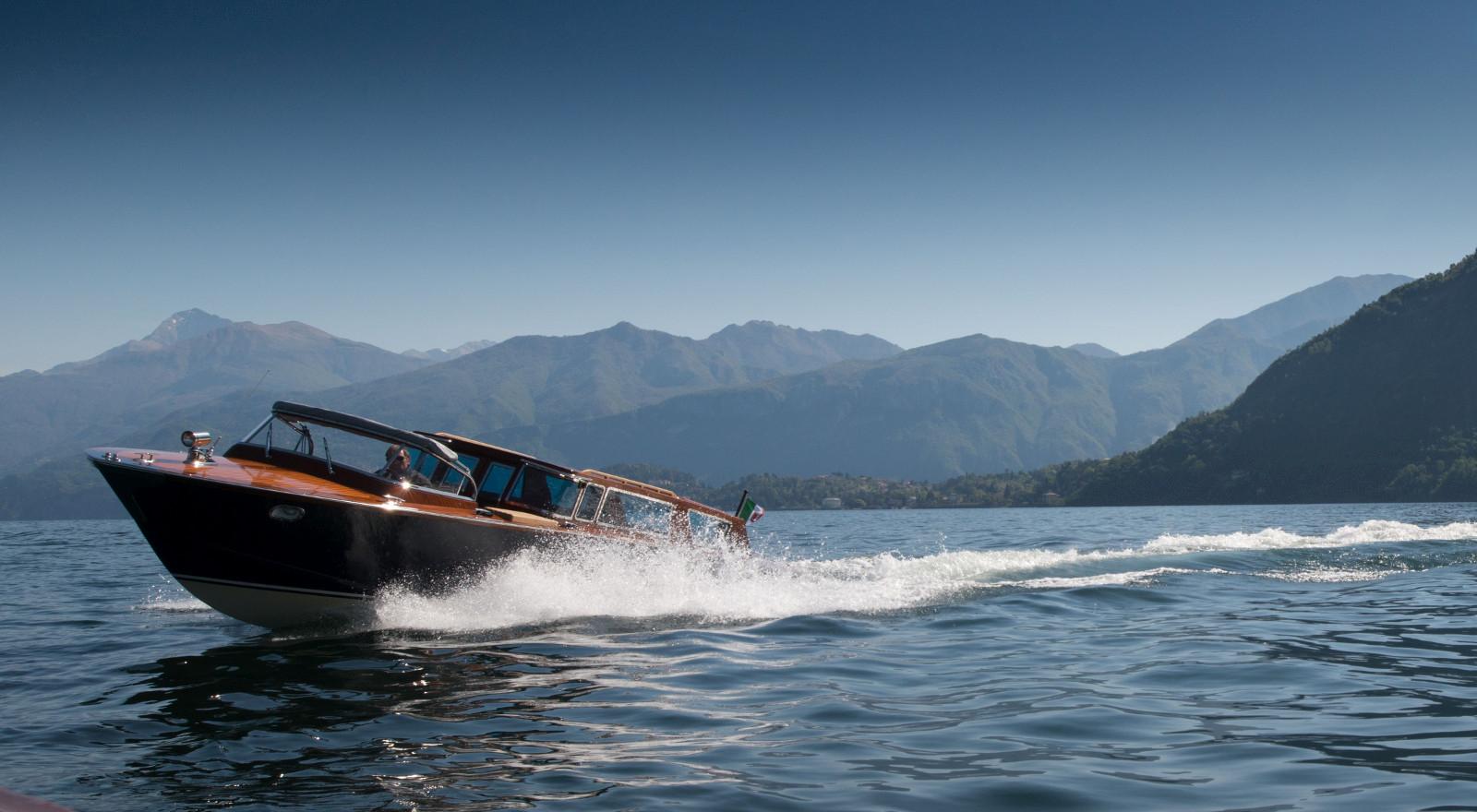 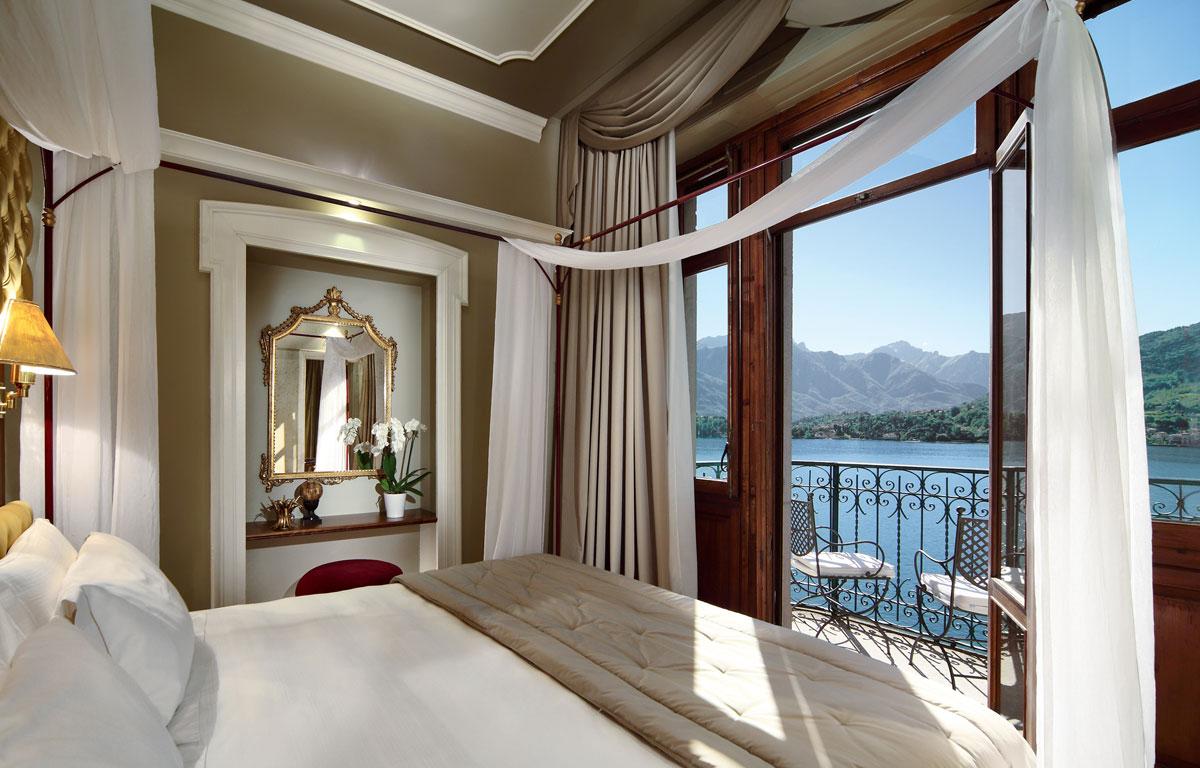 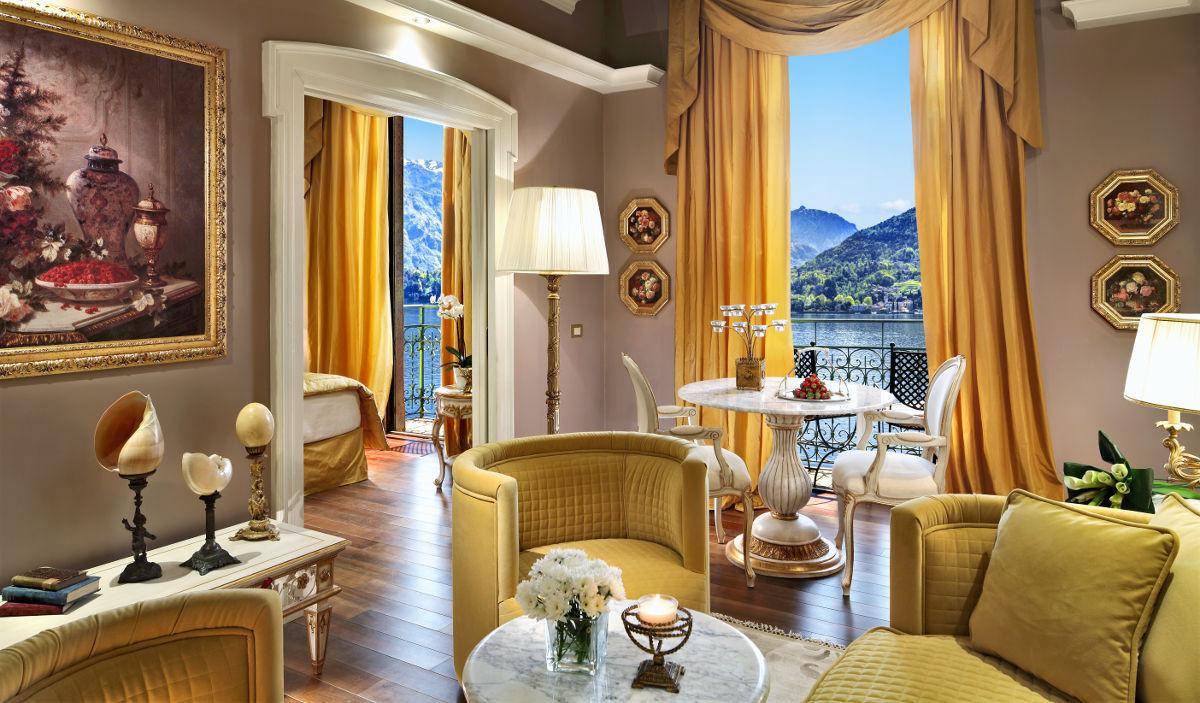 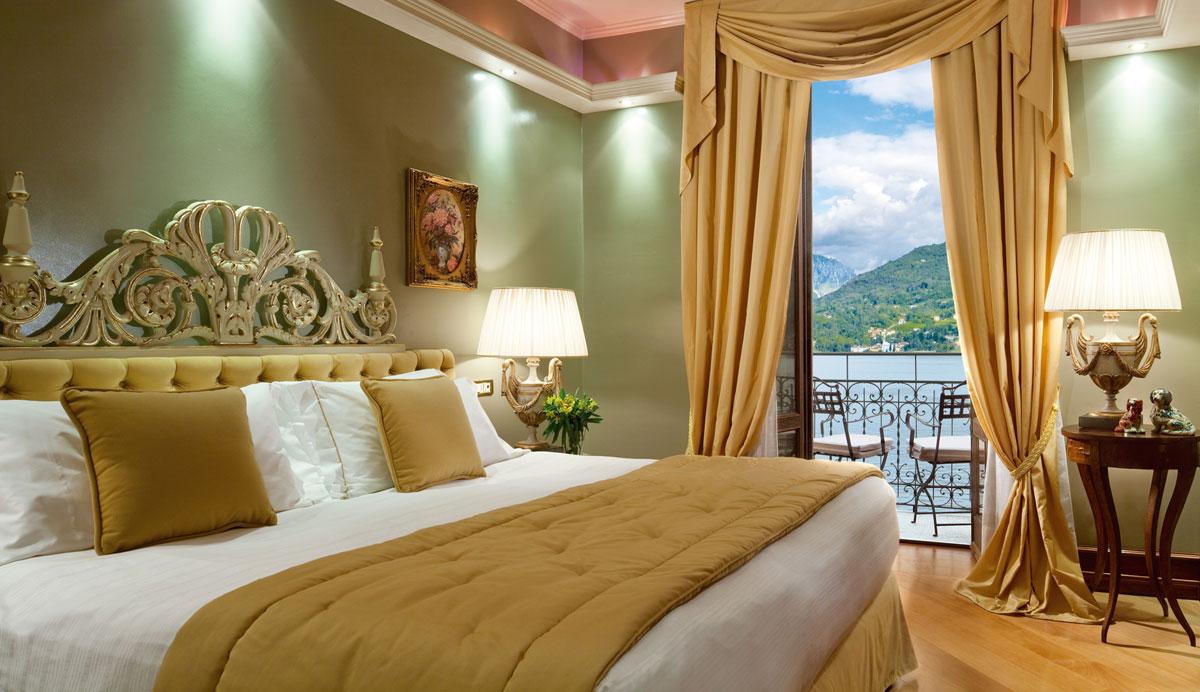 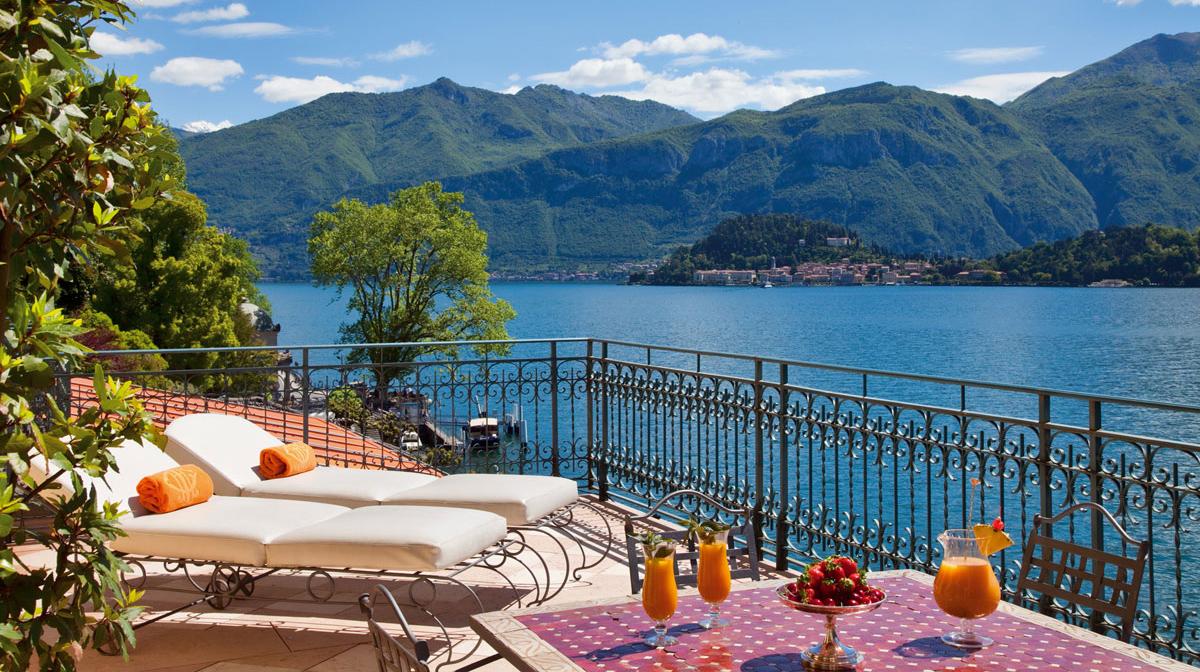 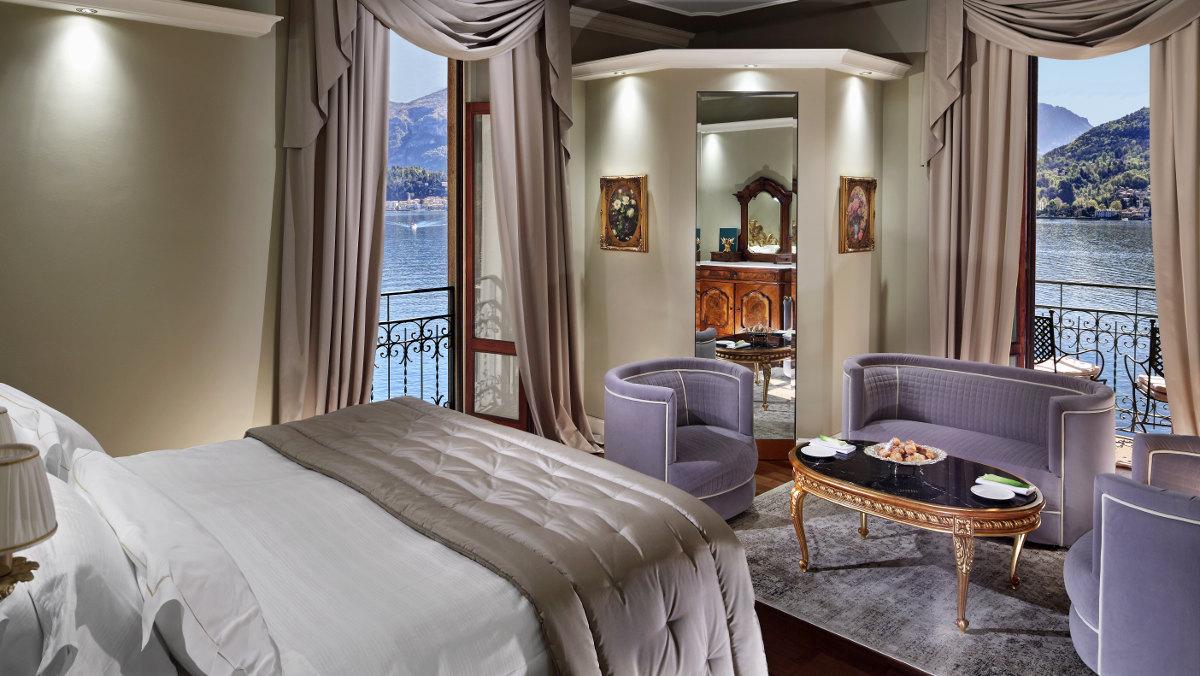 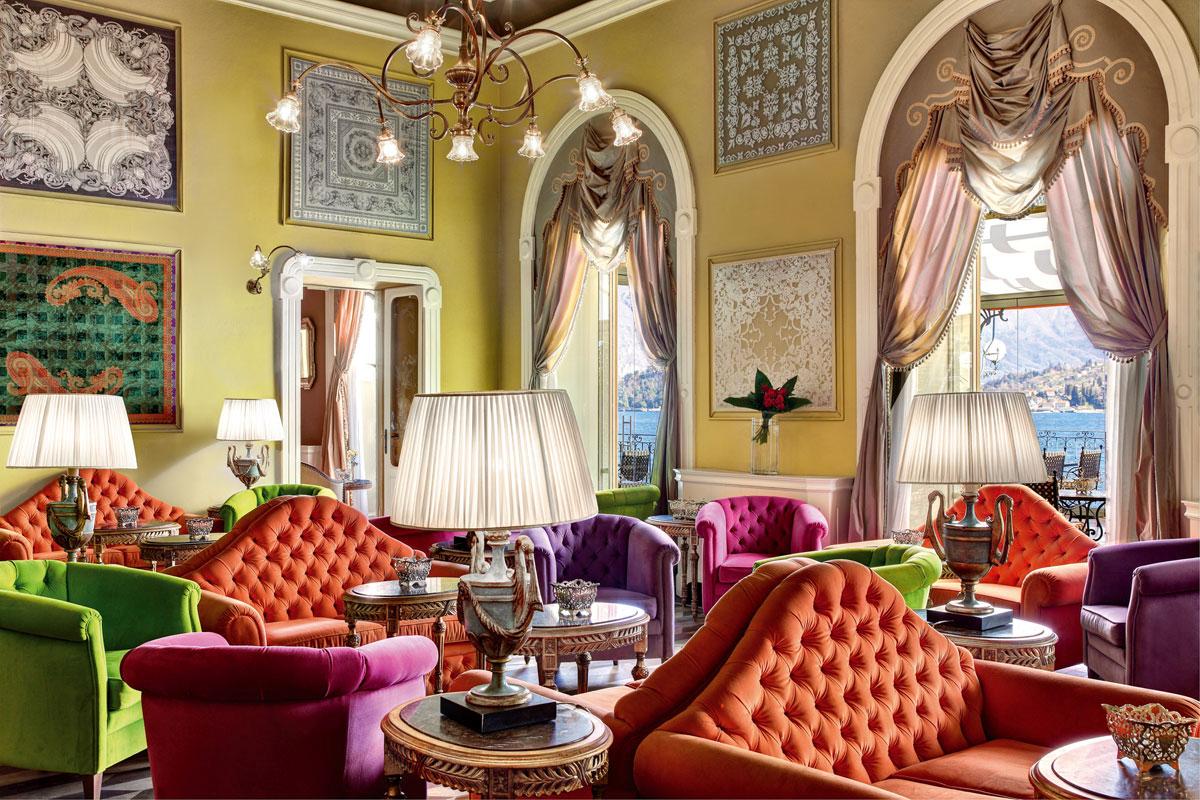 Grand Hotel Tremezzo is a five-star deluxe hotel built in Liberty style in 1910. With 100 years of history, it represents much more than a prestigious hotel: it embodies the accommodation art according to the taste and the most authentic Italian tradition. The careful details, the finishing touches, the numerous antique objects, the art pieces, make this iconic Grand Hotel on Lake Como an extraordinary fascinating place, a proper landmark of well living. With its 100 windows overlooking either the blue waters of the lake or the flowering greenery of the garden, the Grand Hotel Tremezzo boasts absolutely the best views on lake Como, all over Bellagio, where the two arms of water meet. The hotel offers 75 elegant rooms and 15 splendid Suites including 8 brand new hyper exclusive Rooftop Suites. The Grand Hotel Tremezzo is a true "resort" providing a comprehensive, multifarious array of comforts: 3 breathtaking pools (one floating on the lake, one hidden in the park, one indoor), lakefront classic-style lido, private Venetian motor-launch for exclusive tours of the lake, the luxurious T Spa with zero sight-line panoramic relaxation lounge offering the exclusive ESPA treatments, 2-hectares lush secular park incorporating panoramic path, floodlit clay tennis court, fitness and saunas. Five different restaurants and snack bars, overseen by the Master Chef Gualtiero Marchesi, the world's most famous Italian chef, will seduce all palates.

Newest addition: Villa Sola Cabiati, the most beautiful aristocratic residence on Como, is available exclusively to the Guests of the Palace and offers an hyper exclusive six bedrooms accommodation bursting with a history of decadence

Villa Carlotta, Grand Hotel Tremezzo neighbour, located just 5 minutes walking from the entrance, is the most famous villa on Lake Como, in particular for its centuries-old 70,000sqm park. Its botanic gardens are filled with colour in spring from orange trees knitted into pergolas and some of Europe's finest rhododendrons, azaleas and camellias. The villa, strung with paintings, sculptures (some by Antonio Canova) and tapestries, takes its name from the Prussian princess who was given the place in 1847 as a wedding present from her mother. Upstairs, rooms with period furniture provide an insight into the life of the princess.

Located just 1 Km outside Lenno, this was where scenes from 2006's James Bond remake, Casino Royale, and Star Wars Episode II were shot; it is one of the most dramatic locations on Lake Como (if not the world). Built by Cardinal Angelo Durini in 1787, Villa Balbianello is set amid florid gardens on a promontory. The sculpted gardens, which seem to drip off the high promontory like sauce off a melting ice-cream cone, are the perfect place for hopelessly romantic elopers to spend a day. Visitors are only allowed to walk the 1Km path from the Lenno landing stage to the estate on Tuesday and at weekends. On other days, you have to take a taxi boat from Lenno. If you want to see the villa, you must join a guided tour.

Once the site of a Roman fort and medieval settlement, Lake Como's only island forms its own little bay with the mainland. When the Lombards invaded northern Italy, the island held out as a Byzantine redoubt. The medieval settlement was razed by Como in 1169 as punishment for its loyalty to Milan. Today, as silent witness to this terrible event, lie the scant ruins of the Romanesque Chiesa di Sant'Eufemia. Since 1947 Locanda dell'Isola has been serving the same abundant set menu on the south side of the island, within a dinner characterised by the "exorcism by fire" ceremony to ward off the excommunication of the island declared by the Bishop of Como back in the 12th century.

Worldwide known as the "pearl of Lake Como", Bellagio is suspended like a pendant on the promontory where the lake's western and eastern arms split and head south. It's impossible not to be smitten by Bellagio's waterfront of bobbing boats, its maze of steep stone staircases, red-roofed and green-shuttered buildings, dark cypress groves and rhododendron-filled gardens. It sits at the crux of the inverted Y that is Lake Como; the Como and Lecco arms of the Lake wash off to port and starboard. Wander out of the old town centre to Punta Spartivento and gaze north up the third arm towards the Alps. Garden lovers can also stroll the magnificent grounds of neoclassical Villa Melzi, built in 1808 for one of Napoleon's associates, and coloured by flowering azaleas and rhododendrons in spring. The gardens, adorned with statues scattered about, were the first English style park on Lake Como. Walks around the town lead off to various hamlets, such as Pescallo, a small one-time fishing port about 1Km from the centre. Several Romanesque churches can also be seen, above all the Basilica di San Giacomo in central Bellagio, built in the 12th- century by master builders from Como.

4 km north of Tremezzo, Menaggio has a cute cobblestone old centre. The central square overlooking the lake has a couple of cafes that are perfect for lake-gazing and people-watching. It is possible to take a minor road out of Menaggio for Plesio and then follow a walking trail for about two hours to the Rifugio Menaggio. At 1383m altitude, the views down over the lake are ample reward for the climb.

A beguiling village bursting with florid plantlife, exotic flowery perfumes and birdsong, is a short ferry ride away from its rival in postcard beauty Bellagio. Its pastel-coloured houses defy the standard laws of physics, seemingly gripping for all they're worth to the steep slopes that rise from the lake. From the ferry land, a 15- 20 minute stroll follows the shore south and cuts up to Piazza San Giovanni and the town's main attractions, Villa Cipressi and Villa Monastero, a former convent turned into vast residence by the Mornico family from the 17th to the 19th centuries. In both cases, a stroll through the magnificent gardens, which reach down to the lake, is a balm to the senses: magnolias (including one specimen in front of the Villa said to be up to 400 years old), camellias and yucca trees are among the villas' floral wonders. Tucked inside the tiny Romanesque Chiesa di San Giovanni Battista, you will find 14th- century frescos, somewhat damaged but nevertheless full of colour. The Sp65 mountain road winds away 3Km eastward from the north exit of Varenna into the hills to the hamlet of Vezio, dominated by the ruins of the 13th century Castello di Vezio. From this one-time fortified watch tower gaze down upon Varenna and over the lake. An old mule path from the Olivedo (north end) part of Varenna also leads up here – it's about 30 minute puff uphill.

A Cistercian abbey that has marvellous setting on a promontory stretching out into the lake. The church is a Romanesque gem that the Cluniac order raised, there are attractive 13th-century frescos, but the star is the 13th century, irregularly shaped cloister, a rich example of transitional style from Romanesque to Gothic; it's an oasis of peace. The monks who live here today enjoy incomparable views west over the lake to Gravedona and the snowcapped peaks behind it and to the north.

Como, which was established by the ancient Romans, is surrounded on three sides by medieval walls. The atmospheric "Città Murata" is the old, formerly walled quarter, today a dense grid of narrow pedestrianized lanes full of shops and little bars and restaurants. The city is a compendium of the beautiful things that the lake has to offer. There are magnificent churches (the Duomo Cathedral, but also Sant'Abbondio and San Fedele churches), historical villas and gardens (Villa Olmo and Villa Geno) luxuriant vegetation (Spina Verde Park), and fabulous panoramic spots such as Brunate which can be reached by way of an antique cable railway.

Although largely gothic, elements of Romanesque, renaissance and baroque styles can also be seen in Como's fancy, marble-clad Duomo. The Cathedral was built between the 14th and 18th centuries, and is crowned by a high octagonal dome. Next door, the polychromatic Broletto, or medieval town hall, is unusual in that it butts right up against the church and is rather overwhelmed by it – a singular defeat for laicization.

About 500m south of the city walls is the remarkable 11th-century Romanesque Basilica di Sant'Abbondio. Aside from its proud, high structure and impressive apse decorated with a beautiful geometric relief around the outside windows, the highlight is the remarkable fresco series inside the apse.

The circular layout of the originally 6th-century Basilica di San Fedele with three naves and three apses, has been likened to a clover leaf. Its 16th century rose window and precious 16th and 17th century frescos add to its charm. A craft and antiques market fills the piazza in the front of the basilica during week-ends.

Set grandly facing the lake Como, the sandy-coloured, statue-topped, neo-classical façade of Villa Olmo is one of Como's landmarks. If there's an art exhibition inside, you will get the chance to admire the grand ballroom, at the heart of the long building. Otherwise, this mini-Versailles may well be locked up, but that won't stop you from having a jog around the gardens, Italianate facing the lake and English style at the rear. Almost as nice as the gardens is the lakeside stroll to get there. From the stadium, follow Passeggiata Lino Gelpi along the water. You pass a series of mansions and villas (and their gardens) along the way, including Villa Saporiti (late 18th century) and the adjacent Villa Gallia (17th century), both now part of the provincial government. A summertime bonus is the Lido di Villa Olmo, an open-air swimming pool and the lakeside bar, complete with sand and umbrellas.

This museum unravels the town's silk history, with early dyeing and printing equipment on display. A wander around takes you through the entire process of producing silk.

Como is flanked to the east and west by steep and thickly wooded hills. A ride up to the quiet residential village of Brunate, which seems to float above Lake Como – it sits at 720m above sea level – is repaid by exhilarating views. The Funicolare (cable car) Como-Brunate will take you up in just seven minutes: from Brunate's funicular stop, scale 143 steps to the top of the lighthouse, built in 1927 to mark the centenary of Alessandro Volta's death.

The shoreline of Cernobbio, a graceful town 5Km north of Como (served by frequent boats and buses from Como), comprises a compact quarter of old houses just off the lakeside piazza and is laced with a series of fine villas fronting the water. Following signs out of central Cernobbio, take a scenic drive that winds 17Km up through the residential villages behind Cernobbio to Monte Bisbino, a fabulous lookout spot.

The lower lakeside road (Via Regina Vecchia) skirts the lakeshore out of Cernobbio and past a fabulous row of 19th-century villas (all private property) around Moltrasio. Winston Churchill holidayed in one (Villa le Rose) just after WWII and another is owned by the Versace fashion dynasty. A few kilometers north, the villa-lined hamlet of Laglio is home to the star George Clooney (he lives in Villa Oleandra).

A true paradise for golf lovers: Lake Como is surrounded by seven of the Italian finest 18-hole golf courses: