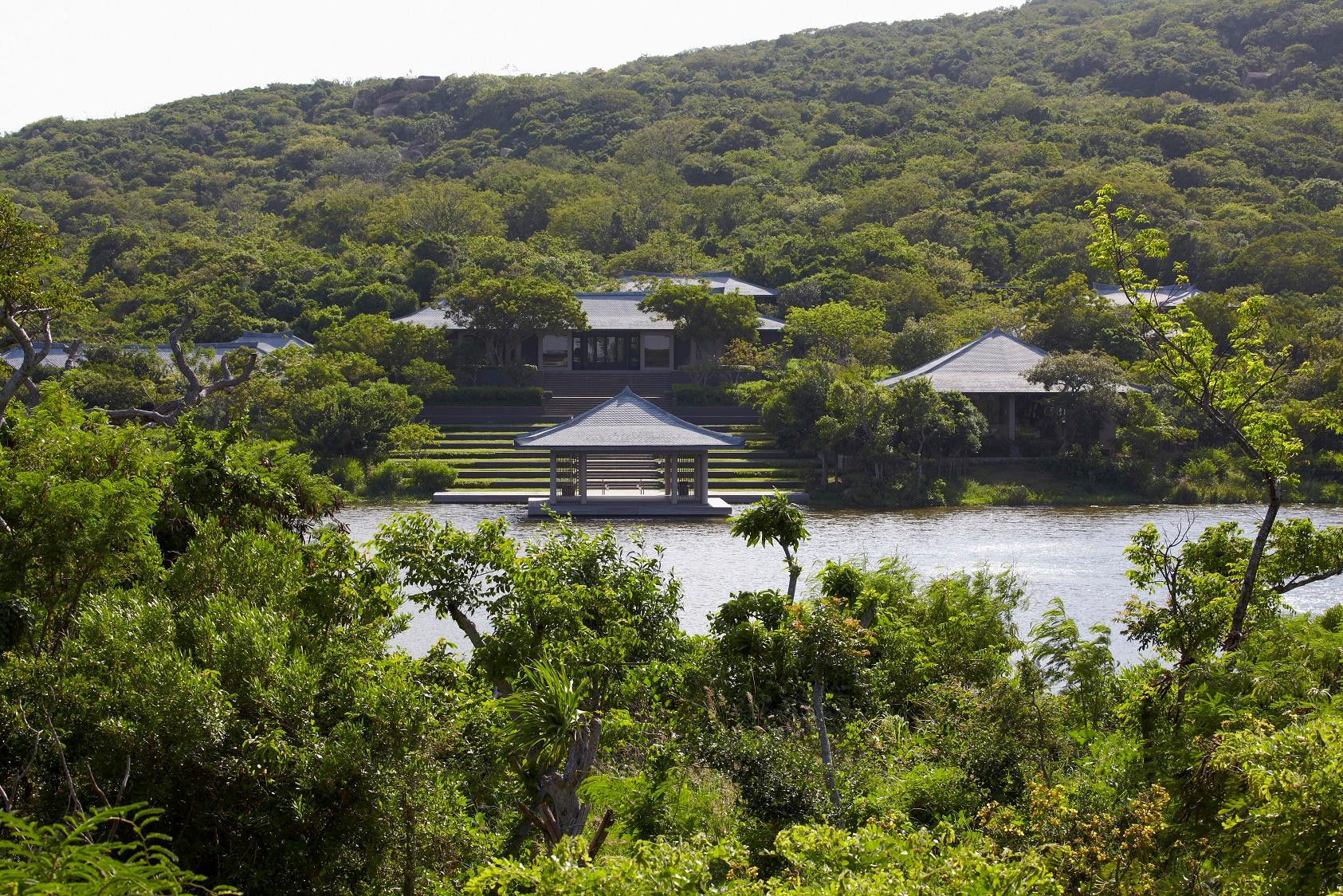 Meaning 'peaceful place', Amanoi is a contemporary beachside resort with 9 guest Pavilions, 18 Pool Villas, six Residences and two Wellness Pool Villas.  Overlooking Vinh Hy Bay on Vietnam's dramatic central coast, the property is embraced by Nui Chua National Park.
Set high on a wide promontory, Amanoi lies 55 kilometres south of Cam Ranh Airport in a region renowned for its spectacular mountain and coastal scenery. Magnificent views unfold from the hilltop infinity pool and the Central Pavilion, which houses the Restaurant, the Bar and a library. Down on the shore, the Beach Club, with its dining area and second swimming pool, overlooks a private sandy beach, lapped by the coral-rich waters of a marine reserve.

Impressive views are a feature of all Amanoi's accommodation, which captures vistas of Nui Chua National Park, the property's lake, Vinh Hy Bay and the East Sea. The freestanding Pavilions offer a combined living and sleeping area and a timber sundeck with sun loungers; Pool Villas also feature a private pool of up to 36 square meters.

The Residences each consist of two to five freestanding bedroom pavilions, living and dining pavilions, and a large private swimming pool. A 24/7 personal butler meets all guests’ needs. Residences are set on the hillside, with one located at the Beach Club.

Set by Amanoi's lotus-filled lake, two Wellness Pool Villas – one featuring a Moroccan hammam; the other a Russian banya – allow guests to enjoy therapies in complete seclusion. As well as their authentic bath houses, each includes a large private pool, a plunge pool and a Jacuzzi. Nearby, the main Aman Spa includes five double treatment rooms, two hydrotherapy suites, relaxation pavilions and a finishing salon. Fitness options include a light-filled gym, a Pilates studio, a yoga pavilion set over the water, and two tennis courts.

The tower was built in the late 13th and early 14th centuries in honor of King Po Klong Garai (1151-1205). During his reign, the king focused on agricultural development. The two projects he built are Nha Trinh Dam and Cham canal, which are still in existence.

Recognized as a relic of architecture, art and sculpture by the Ministry of Culture, Sports and Tourism in 1979, Po Klong Garai Tower has three structures of different sizes -- Chinh (main tower), Cong (gate tower) and Hoa (fire tower).

Measuring over 20 meters in height, the main tower is where people wordship King Po Klong Garai. The gate tower is more than eight meters high while the fire tower is around 9 meters high.

The surfaces of the towers are engraved with humans, dragons, leaves and sacred cows in stones and ceramics.

According to Cham people’s belief, the fire tower is the place for resting in peace and keeping the items used during ancient rituals while the gate tower is where people can take a rest to find peace before entering the main tower.

The unique part of Po Klong Garai tower lies in the clay bricks used for building it and the glue used to stick those bricks together. The glue is believed to have been made from an extract from a plant species called Dipterocarpus alatus, a tropical forest tree common in Thailand, Cambodia, Laos and Vietnam. How the Dipterocarpus alatus extract was mixed with other materials to make the glue remains a mystery.

On December 30, Cham people still keep their tradition of gathering at the tower on the first day of the seventh lunar month for a ceremony to honor King Po Klong Garai and in October to celebrate Kate festival, during which they pray for pumper crops and prosperity.

It is easy for tourists to get to Po Klong Garai Tower on Trau Hill on Bac Ai Street, around 9 kilometers from Phan Rang-Thap Cham City.

On the way to Phan Rang-Thap Cham, tourists should drop by a local restaurant to eat banh xeo (rice pancake). The flavor of Phan Rang pancakes is slightly different from those made in the southern region. Rice flour is poured onto ceramic molds, instead of being fried. On the pancake are seafood like shrimp or squid, bean sprouts and green onions. The cake is served with fish sauce mixed with ground peanuts.

The magnificence of Vinh Hy Bay

The Vinh Hy bay located in Vinh Hai village, Ninh Hai district, is 42km from Phan Rang-Thap Cham. Surrounded by white sand beaches, majestic with towering rocky mountains and mysterious caves and poetic with cascading waterfalls creating streams in vast dense forest. Visitors can take some activities such as: dip in the stream water, go fishing,climbing, caving, enjoy clear atmosphere.
Visitors can choose to take a cruise in the bay to see the coral reefs and the many islands and rocks with their fascinating shapes, like an ear or a turtle, or a hand with fingers stretching to the sky.

But to tourists on their second or third visits tend to opt for the boat voyage to the off-the-beaten-track areas. The original beaches and beautiful rocks will impress even the most seasoned traveler.

There are many beaches to choose for both amateur and strong swimmers, such as Ba Dien (crazy woman), Coc (cup), and Tien (fairy) beaches in the bay, and Thung, Hoi, Binh Tien beaches which slope gently to the sea.

It takes more than an hour to reach these tranquil beaches, but the scenery on the way is breath-taking and the reward once you arrive is gentle waves, breezes blowing in from the sea and the sweet sound of waves lapping against the shore, especially if you are willing to take the 30 minute boat trip to some of the more remote beaches.

A boat driver called My told the Daily that he has transported numerous tours through the walls of high and rocks perched by the sea, all of whom have been overwhelmed by the picturesque beauty of the area.

The waves are constantly crashing against the walls of rocks. Over time the landscape may change as the rocks are transformed by the waves, however the magnificence of Vinh Hy continue to attract visitors from near and far.

Ninh Thuan Province is considered “a desert” of Vietnam and Nui Chua National Park is a typical example. there are rows of cacti growing on the hill and mountain slopes. The trees growing on the rocky land look scrawny but full of vitality and there is a forest of apricot trees that look like bonsai trees, but in spring they change into yellow blossom, producing a beautiful landscape.

It said that the forests in Nui Chua are like the forests of bonsai trees.  There are scenes of mountains overlapping mountains and rocks overlapping rocks. Its landscape is so beautiful that  you want to stop many times to contemplate and take photographs.

Nui Chua National Parkhas  has an area of 29,865ha, including 22,513ha of land and 7,352ha of sea, which is complex of mountains lying near the coastline, called Nui Chua. Its terrain is highly sloping and divided by streams. The climate here is dry compared with other localities in Ninh Thuan Province.

This place attracts visitors with many attractions on Da Vach Mountain that run along the beaches. One of them is the Treo Lake on the top of the mountain, which has a diameter of 80m, with blue water all year round even though it is located in one of the driest areas in Vietnam.  After visiting the relics on the mountain, tourists can also spend time on the beautiful beaches on the 40km-long. They can play along the beaches or travel around on a glass-bottom boat to witness the beauty of corals underneath. In addition, they can visit Hom Beach, a natural breeding ground of some rare turtles on the East sea.
https://www.vietnam-travel.org/destinantions/nui-chua-national-park-likes-as-the-forests-of-bonsai-trees.html