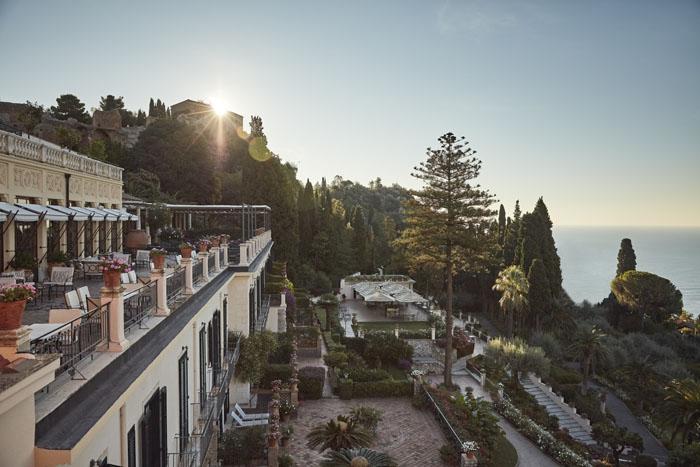 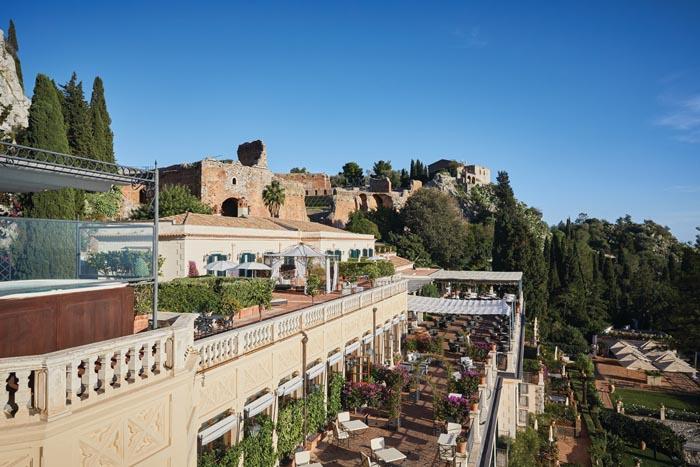 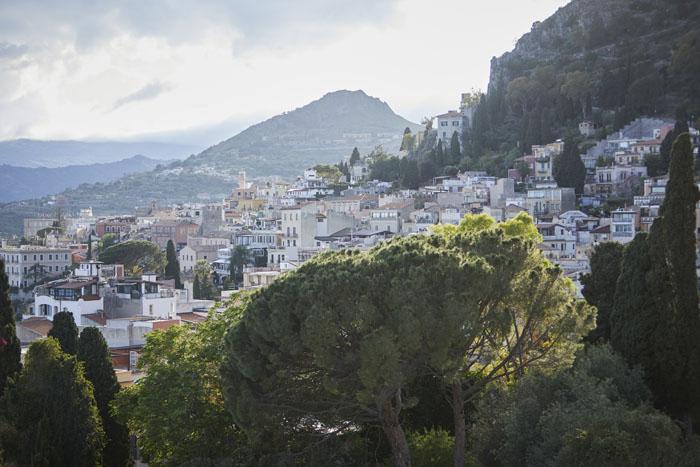 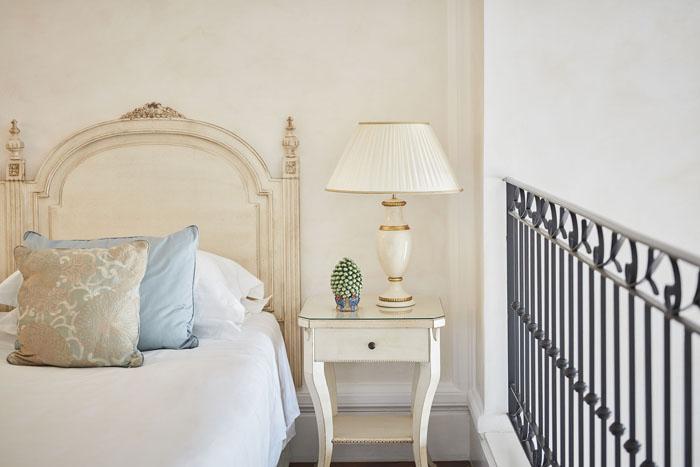 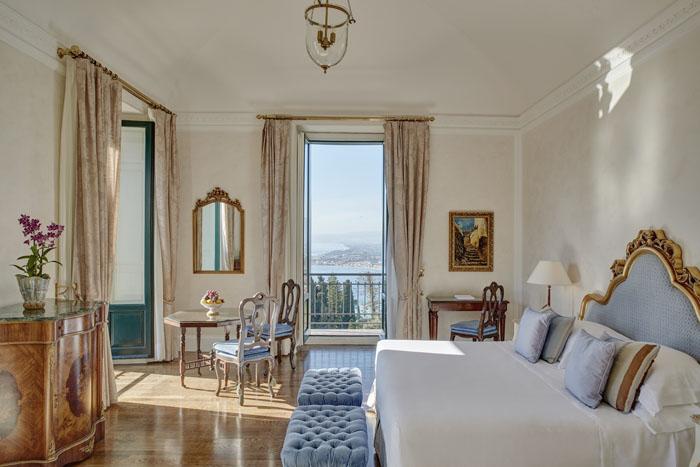 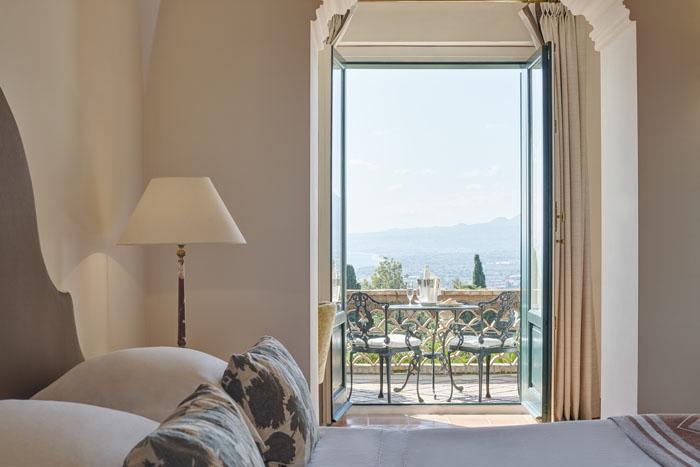 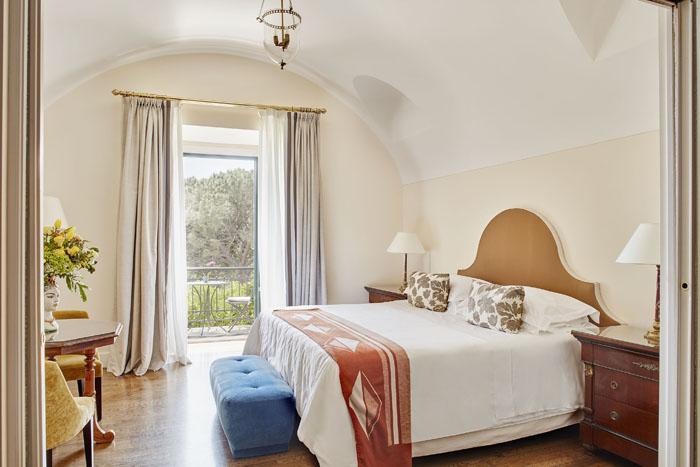 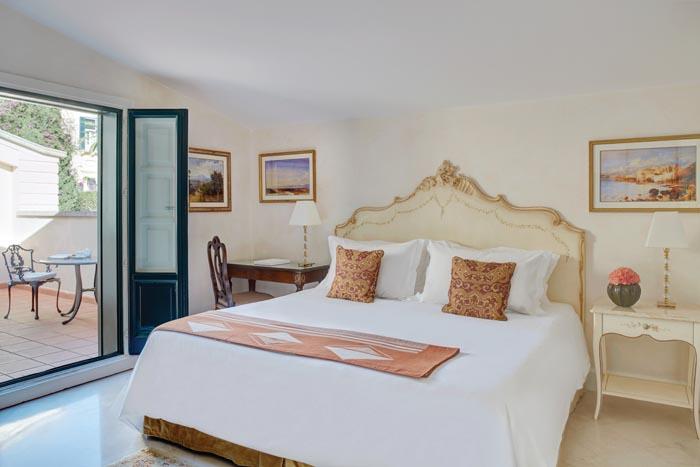 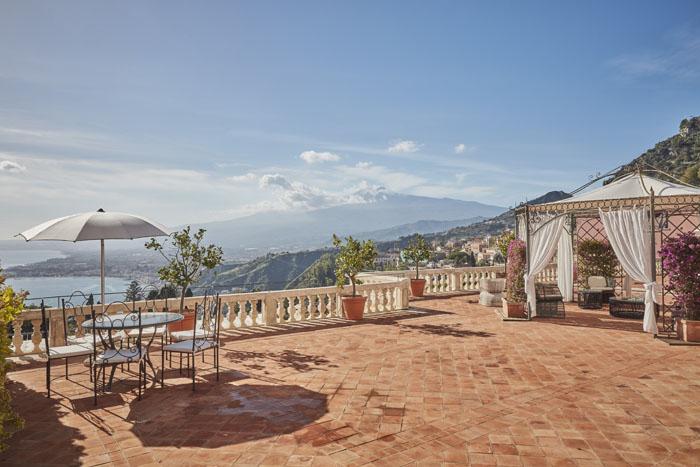 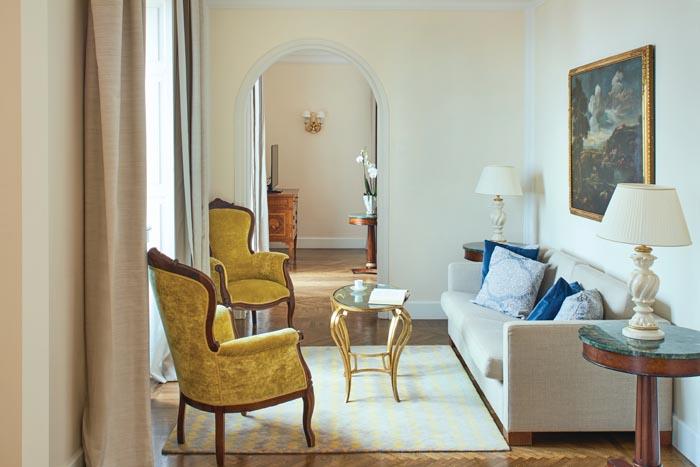 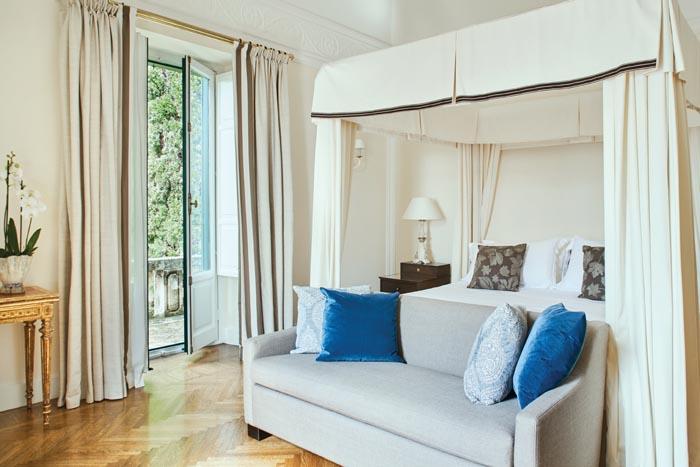 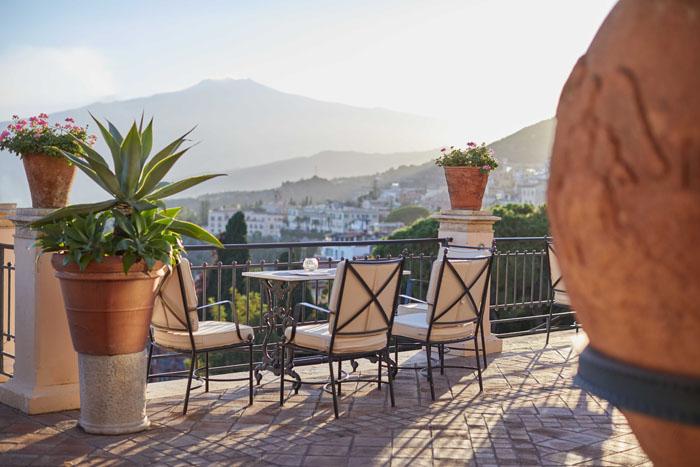 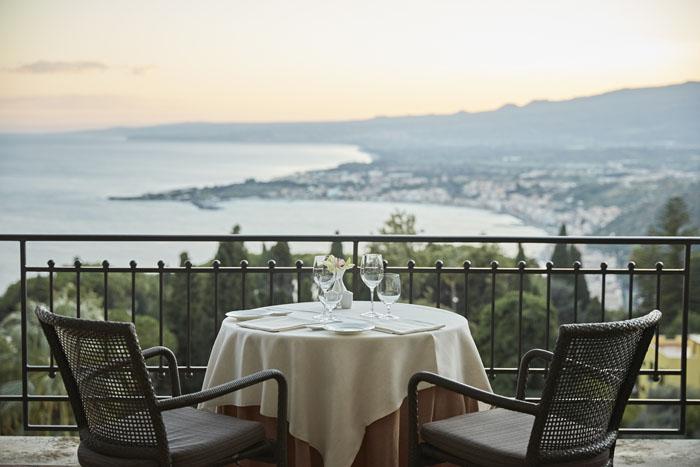 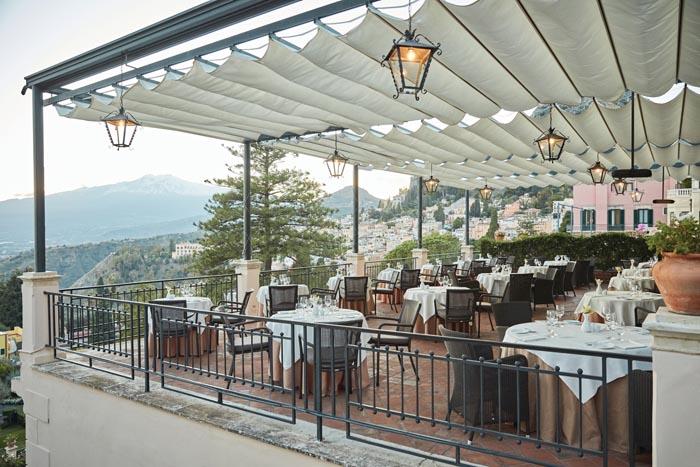 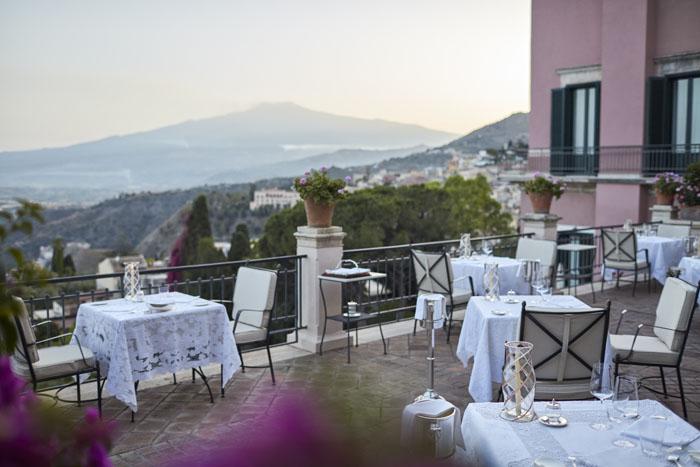 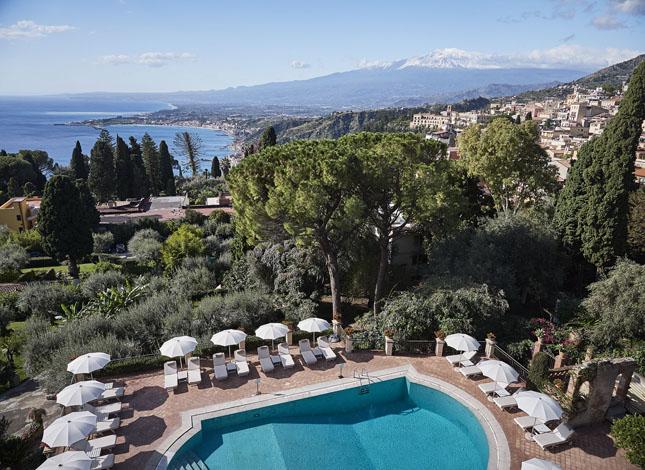 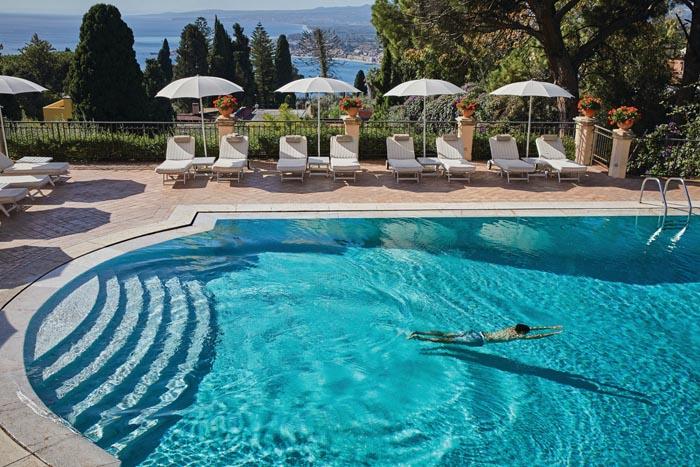 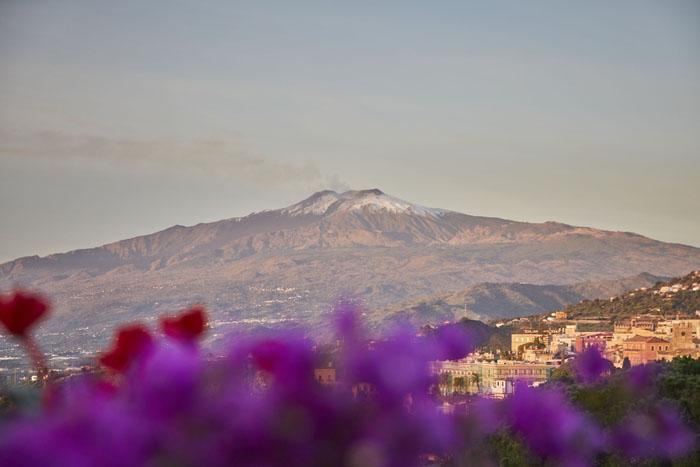 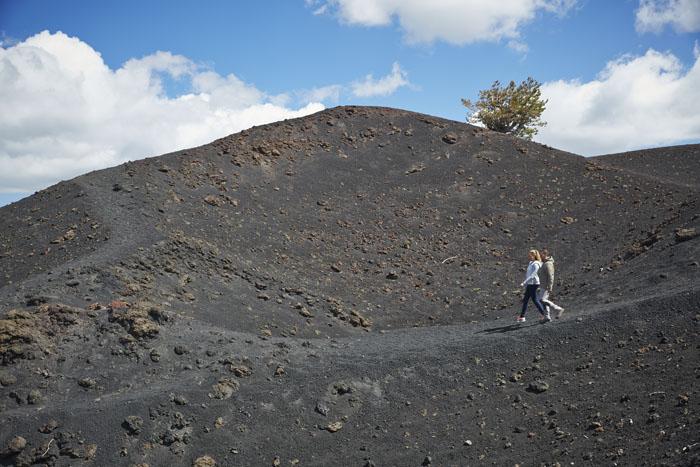 Don Francesco La Floresta’s decision to convert his house into a hotel in 1873 made perfect sense. Ever since a Prussian artist returned to the mainland with watercolors depicting views from his guesthouse, he had received visitor after visitor. People from all over Europe wanted to see the panoramas for themselves. Well over a hundred years later, Belmond Grand Hotel Timeo’s breathtaking vistas and unique charm continue to enchant.

Make your way up the rugged cliffs on which Belmond Grand Timeo is perched and a sense of enchantment soon takes over. You may be right in the heart of Taormina but you’ll feel like you’ve stumbled upon your very own hideaway. The magic grows when you lay eyes on our lovely entrance, swathed in bougainvillea. Through our doors, everything inspires—from our warm doorman (a part-time aria singer) to our mixologist’s aperitivos.

Soak up the sun by our pool or stroll through acres of lush garden graced with tropical palms and wild flowers. There’s even a kitchen garden: Timeo Restaurant uses only the freshest local ingredients for its Sicilian dishes, whether that be Mozia salt or Bronte pistachios. Are you a fine-dining lover? Take your seat at Otto Geleng Restaurant, one of Sicily's most exclusive Michelin-star restaurants, and ignite your taste buds with exquisite Mediterranean dishes prepared by Chef Roberto Toro served in a unique setting that evokes an ancient Sicilian villa. There’s no better place to take in the dramatic sunset than our Literary Terrace. The panoramas need to be seen to be believed: Truman Capote enjoyed them so much that he stayed for two years; D. H. Lawrence wrote Lady Chatterley’s Lover here. Writer’s block? It’s here you’ll want to sit and craft your postcards home. Each time you gaze out across medieval Taormina, it’s like seeing the world anew. With clusters of terracotta roofs giving way to shimmering blue sea and dramatic Mount Etna looming on the horizon, views here are a transcendent experience. You’ll struggle to take your eyes away.

You can find more of this little island’s treasures at our Wellness Centre. Our signature Sicilian Sensations treatment features a lava ash exfoliation, a pumice stone footbath and handmade soap using local extra virgin olive oil. If one of the world’s most magnificent views hasn’t already sent you into total bliss, this surely will.

A visit to Europe's largest volcano offers an incredible chance to see lava flows up close.

Discover the exceptional beauty of the Aeolian Islands aboard a private yacht.

Aboard a private yacht guests will visit the volcanoes of Stromboli, the lush foliage of Salina and picture-perfect Panarea. They will stop in secluded bays and can choose to dine on board or ashore in an authentic fish restaurant.

The Godfather was filmed in Savoca, 20 minutes north of Taormina. This typical Sicilian village will resonate with fans of Francis Ford Coppola's masterpiece. Guests will jump aboard a vintage car and follow in Al Pacino's footsteps, visiting Bar Vitelli and the Church of St. Lucia.

Guests at Belmond Grand Hotel Timeo Spend can visit the house of English watercolorist Robert Hawthorn Kitson. They will spend the day discovering the spectacular architecture of this masterpiece of the Arts and Crafts movement, its authentic Sicilian decorations and priceless art. The hidden frescos by Sir Frank Brangwyn are not to be missed!

Hire a private beach cabana and retreat to a personal sanctuary beside the azure sea.

Guests can hire a private beach cabana and retreat to a personal sea-side sanctuary at the hotel's sister property Belmond Villa Sant’Andrea. Perfect for up to four guests, each is equipped with a comfortable sofa, table, minibar, tented veranda and two sun loungers, with access to soft drinks from the minibar, fresh fruit, Evian water spray and dedicated waiter service. Available all day from 8:30 am to 8 pm.

Out and about with Belmond Grand Hotel Timeo

To follow the footsteps of yesteryear’s Hollywood stars and celebrities, we’ve crafted a tour in the world’s most glamorous three-wheeler, the Ape Calessino.

In the company of an expert driver, guests will set off on a Dolce Vita Tour of Taormina departing from Belmond Grand Hotel Timeo. Visit Casa Cuseni, located high above Taormina’s rooftops, a beautiful, honey-stuccoed residence built by British painter Robert Kitson in the early 20th century. A visit to the town’s Botanical Gardens will follow before descending to the sparkling coast and Mazzarò Bay – perhaps stopping for a picnic on Isola Bella beach. The tour continues on the hilltop village of Castelmola to gaze at the views and indulge in a glass of almond wine at Café San Giorgio, once a regular haunt of Sir Winston Churchill. Return to Taormina for a wander along Corso Umberto I, the bustling main thoroughfare where Orson Welles, DH Lawrence and Truman Capote were known to browse. And for a glorious finale, a stop for refreshment at one of Tennessee Williams’ favorite watering holes awaits, along with the panoramic vistas of the bay and Mount Etna.