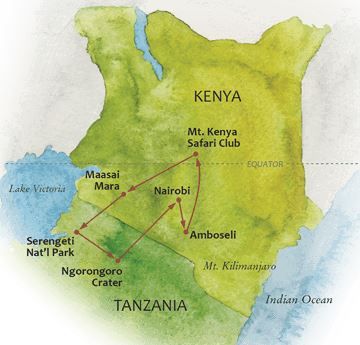 The grand, glamourous, unabashedly luxurious safaris favoured by princes and princesses, potentates, plutocrats, and ex-presidents (Teddy Roosevelt’s epic 1909 safari was one of the first of its sumptuous kind) are central to East Africa’s heritage as one of the world’s most desired destinations. This Grand Safari is Micato’s homage to those old and romantic days, to their indulgent and exquisite grace.

The Micato Grand Safari’s six flights make travel between game preserves and luxury camps a seamless, time-saving joy. And our stays in places like the airy Tortilis Camp in Amboseli; Bateleur or Governor’s Il Moran camps in the Maasai Mara; the charmingly luxe Four Seasons Safari Lodge in the Serengeti; and, of course, the Lewa Safari Camp bring us into close and comfortable contact with some of Africa’s richest game lands and most stirring landscapes.

Lewa Downs Wildlife Conservancy is located in the northern foothills of Mount Kenya in an area known as Laikipia. Lewa Downs is a private game sanctuary that is world famous for their black rhino conservation work. The vast rolling hills and riverine habitats are the perfect environment for black and white rhino and a wide range of Kenya's birds and indigenous wildlife including the threatened Grevy's zebra.