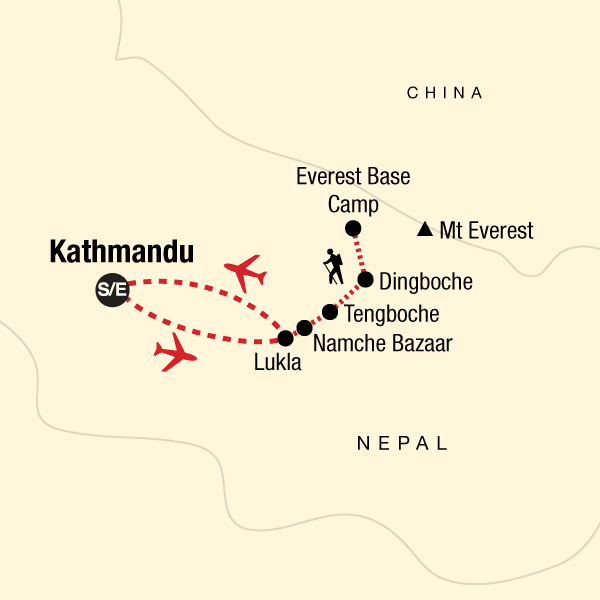 Everest Base Camp Trek
Everest is more than a mountain and the journey to its base camp is more than just a trek. Along a route dubbed by some as "the steps to heaven," every bend in the trail provides another photo opportunity - beautiful forests, Sherpa villages, glacial moraines, and foothills. For active adventurers not afraid to break a sweat, our full trekking support staff will bring you close to local cultures before opening a window to the top of the world.

What's Included
Your Welcome Moment: Meet Your CEO and Group. English-speaking local guide and assistants for the trek. Porters included on the trek. Trekking to Everest Base Camp. Internal flights. All transport between destinations and to/from included activities.

Phakding is a small village in the Dudh Kosi river valley in the Khumbu region of Nepal. It is a popular stopping point for trekkers on their way to Mt. Everest to acclimatize.

Namche Bazaar is a village commonly visited by trekkers and climbers heading for Mount Everest base camp to acclimatize. The village is known for its breathtaking panoramic views, delicious bakeries, three small museums, a monastery, stupa and well stocked stores.

Tengboche (Thyangboche) is a beautiful village in northeastern Nepal in the Khumbu region, at an elevation of 12,687 feet. The village is known for its breathtaking panoramic view of the Himalayas, as well as important Buddhist monasteries.

Dingboche is a village in Nepal located on the way to Mt. Everest. It is a common stop for trekkers headed to Mt. Everest to acclimatize.

Lobuche (Lobuje / Loboje) is a small settlement on the ascent towards Mount Everest Base Camp in the Khumbu region of Nepal. It is a common stop for trekkers before completing the trail to Everest.

Gorak Shep (Everest Base Camp) is located inside the Sagarmatha National Park and is the home of the Sherpa people, famous for their skills as mountain guides. This frozen lake bed covered with sand is often the final stop on most treks to Everest Base Camp, although many go on for an ascent to Kala Patthar from Gorak Shep after acclimatization. Camping requires a special permit.

Lukla is a town in northeastern Nepal with beautiful views of the Himalayas. It is a common altitude acclimatization stop for trekkers on the way to Mount Everest, providing accommodations, trail supplies and shops.