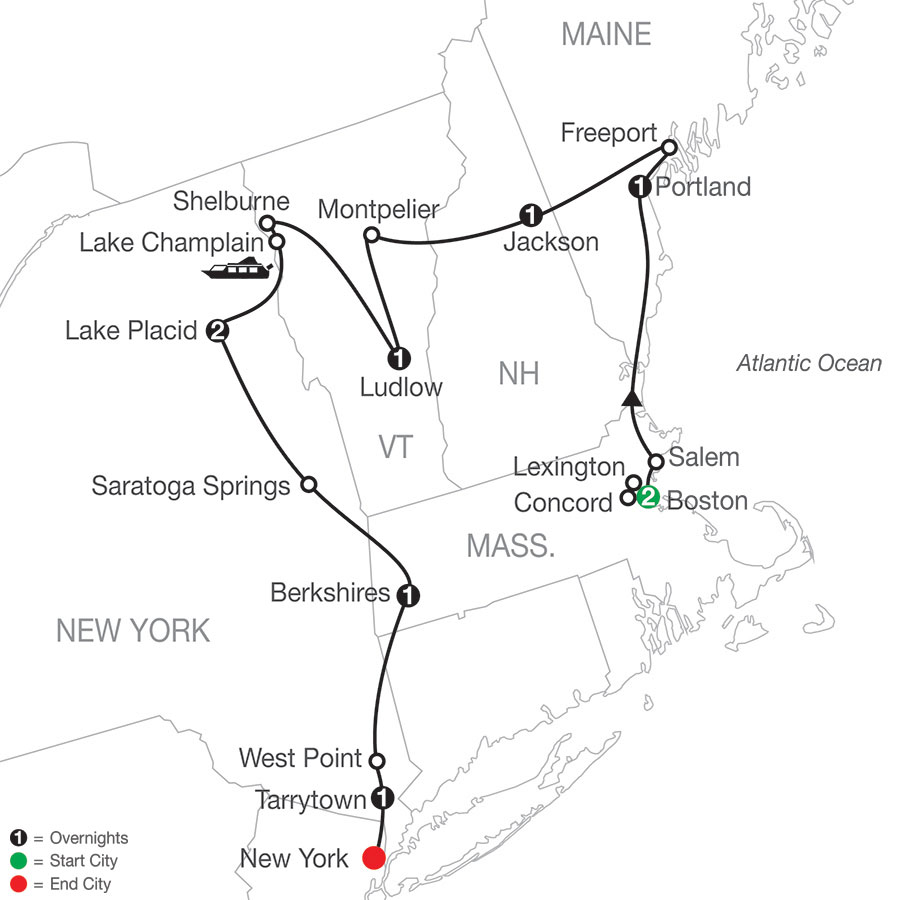 From the Salem Witch Trials to the Headless Horseman, New England is home to some of the nation’s oldest settings and stories. Fact, fiction, and fantastic scenery abound on this vacation to New England and the Hudson Valley. Boston and Concord’s most significant sights of the American Revolution are balanced with the peaceful vistas of coastal Maine, rural New Hampshire, and mountainous Vermont. Charming seaport villages, bucolic covered bridges, and rolling maple syrup farms sweeten the storylines across America’s historic East Coast. The plot thickens as you ferry across Lake Champlain to immerse yourself in the scene stealers of New York and Massachusetts, including the lakeside resort of Lake Placid, the picturesque Berkshire Mountains, and the orchard- and vineyard-dotted riverbanks of the Hudson Valley. Stand up straight as you visit the waterfront U.S. Military Academy at West Point Military. You wouldn’t want to miss the spectacular views.

Sitting at the base of the Okemo Mountain is a 150-year old village greeted with all four seasons. In winter, Ludlow turns into a winter wonderland for skiers, snow tubers, and snow-angel makers. During spring and summer, the village hosts championship golf matches, opens its trails to mountain bikers, and summer camps. Fall means festivals, fairs, arts and crafts and breathtaking fall foliage. Ludlow offers everyone something to do in every season!

New York's Olympic Region is one of the great playgrounds of North America, offering year-round fun and excitement. Nestled in the northeastern portion of the Adirondack wilderness of New York State, the rugged mountain scenery, heavy winter snows, and a pleasant summer climate combine to make the Lake Placid region a popular tourist year-round resort. The Olympic facilities used for the 1932 and 1980 Olympic Winter Games, Santa's Workshop, Highfalls Gorge and other tourist attractions make this area fabulous for family vacations!

Located 25 miles north of Manhattan, on the eastern bank of the Hudson River, Tarrytown is an excellent destination for those interested in history and literature.  With records dating back to the 17th century, the town possesses a number of historic sights.  This includes Tarrytown Music Hall, one of the oldest theaters in the United States, as well as Sunnyside, home of “The Legend of Sleepy Hollow” author, Washington Irving.