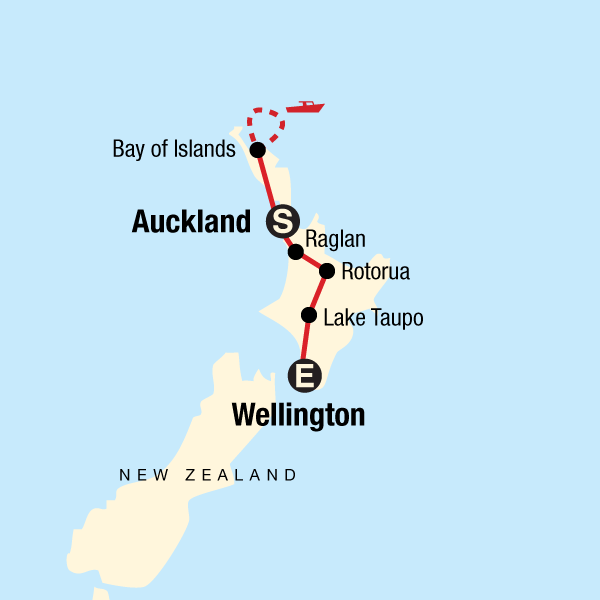 New Zealand: North Island Encompassed
Now's the time to explore New Zealand on your terms with this tour that's affordable for young travellers. Leave your travel FOMO behind on this ten-day tour through New Zealand’s North Island. It'll take you from lit landscapes and 'gram-worthy backdrops with some fun oddities sprinkled in between. Stay overnight on a houseboat in the Bay of Islands, visit an eel (yes, eel!) farm, and witness how glow worms light up the caves of Waitomo. There’s much more, but we’ve gotta leave some surprises for you, right?

Highlights
Snorkel in the beautiful Bay of Islands, surf world famous waves, learn about the Maori culture during a village visit, dance the night away in Wellington.

Just north of North Island, Paihia was founded by Henry Williams and his wife, Marianne in 1823. This town is known for its many "firsts of New Zealand" such as: the first church, the first game of cricket played and the first printing press. "The Jewel of the Bay of Islands" is a thriving settlement popular to its visitors who seek exploration, gastronomical ventures, outdoor expeditions and plenty of discovery. Here, you can swim with dolphins, hike to Haruru Falls, witness authentic Maori culture and even try sand-boarding!

Raglan is a small coastal town on the west coast of New Zealand's north island, just two hours from Auckland. Raglan's stunning harbor proving views of ancient limestone rock formations and the area that was originally inhabited by the Maori for at least 800 years. It is now popular for its surf, with world-class breaks along the coast. There is also a thriving art and music scene, making Raglan an enjoyable laid back town to visit.