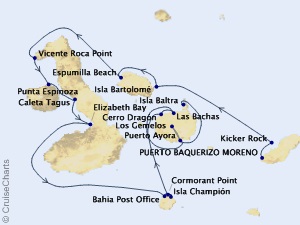 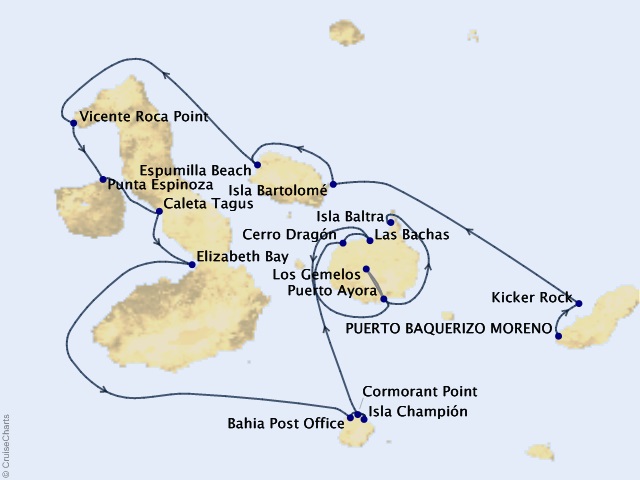 Kicker Rock, also know as the sleeping lion because of its resemblance, is located off the coast of San Cristobal. Kicker Rock is made up of two rocks  jutting out from the sea forming a small channel. Visitors come here to see  the many tropical birds and fish that make this area their home. Visitors can access the narrow channel by small boat or kayak.

Punta Espinoza is the visitor site on Isla Ferdinandina and is situated at the northeast coast of the island. The biggest colony of marine iguanas is situated here. Hundreds of them sunbathe on the rocks. Besides the iguanas, the island is home to flightless cormorants, Galápagos penguins and sea lions. Mangroves and cacti dominate the vegetation. There are also extraordinary lava formations.

On the island of Isabela is Caleta Tagus, a trail that surrounds a salt-lake crater. This beautiful region is also known as the "land of marine iguanas."

This side of Isla Isabella is a paradise for sea turtles. Endemic Flightless Cormorants and the marvelous Galapagos Penguins are in their prime habitat here. Nowhere else in the world do they find themselves more at home.

The Post Office Box on Post Office Bay was used in old days by whalers and others to stay in touch with their loved ones at home. Leaving the letters behind in the wooden barrel, other sailors returning home took it with them. Today tourists take the tradition over and leave post cards behind to be picked up later by others. A large lava tube is located behind the barrel. Visitors can enter the lava tunnels by stairs. The coastal vegetation is a dry tropical forest with low growing trees and shrubs. Frigate birds become frenzied when fisherman or cooks clean fish and throw away the scraps. Watch them playfully throw up the pieces and have aerial acrobatic frigates snatch them from the air. When free meals are not available frigates harass other sea birds in the air to drop their catch. Rays are seen around boats floating close to the water surface. The beautiful sunsets on the equator are fast and should not be missed.

Named not after the bird but a US ship, there is a wet landing onto a, literally, green beach - so coloured because it is made from olivine crystals (volcanic silicates of magnesium and iron). Pencil sea urchins may be found on the beach. A short walk inland and the trail comes to a brackish lagoon. This is home to one of the biggest populations of flamingos in the archipelago, these pink residents spend about 7 hours a day or more eating, and so take some binoculars to watch the ballet of necks as they gracefully move back and fourth, scouring the floor of the lagoon for little shrimp. Take your binoculars to enjoy the show up close. Also present are pintail ducks and stilts. The trail crosses a narrow neck of land and comes to a white beach on the eastern side of the island. Ghost crabs inhabit the beach, and rays and turtles can be seen in the sea. Sea turtles nest at Punta Cormorant (December to May) on the white sand beach, just a short walk away from the olive coloured beach where you land.

Santa Cruz is the center of tourism in the Galapagos. The white-sand beach of Las Bachas on Isla Santa Cruz is a major egg-laying site for Pacific green turtles, but pelicans and flamingos feel at home here, too. Puerto Ayora, the largest settlement in the Galapagos, is homeport to many yachts, as well as home to Galapagos National Park Service and Charles Darwin Research Station. A large island with a variety of geology, wildlife and vegetation, all the Galapagos life zones are present on Santa Cruz.

Puerto Ayora is located on the southern end of Isla Santa Cruz. Puerto Ayora is a charming port town where sea, sun, seabirds and sailboats coexist. On the town's outskirts are the headquarters to the world-renowned Charles Darwin Research Station. Many travelers just pass through on the way to see Lonesome George (a 150-year old tortoise; the last of his species) at Darwin Station. Puerto Ayora is a lively seaside town offering international cuisine, oceanfront hotels, outdoor bars, scuba diving schools and an avenue of boutiques with everything from tie-dyed sarongs to Panama hats. Relish the Islands' crescent slices of sand, spectacular diving, mountain top vistas, and tropical climate. Visit select islands and choose from an array of outdoor activities, such as kayaking, scuba diving, snorkeling, horseback riding and mountain biking. Puerto Ayora provides the most convenient base for island hopping. Three boats, the Delphin, Esmeraldas III and Santa Fe, offer day trips to Florena, Bartoleme, North Seymore and Plazas.

The Los Gemelos Twins are two volcanic depressions on the highest part of Santa Cruz Island - whcih is the fourth largest island in the archipielago and has several great visitor sites.

Today Baltra is the most important airport of Galápagos and a small navy base for Ecuador. Baltra has suffered most from human settling and does not have any visitor sites. Many cruises start from the its harbour and already there pelicans and noddies will welcome you. To the north lies Mosquera, a small sandy bank with a large colony of sea lions. Go swimming and snorkeling on the beach.

Itinerary subject to change without notice. Please confirm itinerary at time of booking.

Information and pricing is subject to change without notice. While we do our very best to ensure that information and pricing appearing in this website is complete and accurate, we cannot be responsible for incomplete and inaccurate representations, which may or may not be under our control. In the event of a pricing error, misrepresentation or omission, we reserve the right to adjust the pricing or make any other corrections. Prices shown are in USD unless stated otherwise.